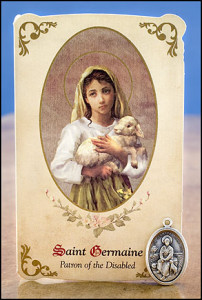 Daughter of a farm worker in the small village of Pibrac, near Toulouse in southern France, Germaine’s mother died when she was young. Germaine’s right hand was deformed and she suffered from tubercular swellings on her neck. Her father never liked her and when he married again, her stepmother, not wanting her around her own healthy children, made her sleep under the stairs or with the sheep in the barn. When she was old enough, she was put to mind the sheep in the fields.

In the fields: miracles

Germaine did not complain and enjoyed talking with God in the fields. She went to Mass as often she could. She would leave the sheep, as she said, in the care of her guardian angel. They never wandered away from where her shepherd’s staff was planted in the ground, nor did the wolves come to attack them. Various miracles are told about her. One day a stream in full flood from rain opened like the Red Sea to let her cross it to go to Mass.

Another tells that her stepmother accused her of stealing bread and chased her with a stick. In the chase Germaine let her apron fall and what fell out on the snow was not bread but summer flowers.

With other children and beggars
Germaine got on well with children younger than herself who did not mock her disabilities and she often gathered them around her to teach them catechism. She would share what little food she had with them and with hungrier beggars.

She becomes respected
By now the local people began to believe they had a saint in their midst and no longer mocked her. Even her father and stepmother changed towards her, but she chose to continue sleeping in the barn.

Death and canonisation
One morning in 1601, Germaine was found dead on her straw mattress. She was twenty-two years old. She was buried in the village church and after her body was accidentally exhumed in 1644 and found to be incorrupt, people began to make pilgrimages to her grave and miracles took place. Pope Pius IX beatified her in 1854 and canonised her in 1867.