St Fursa, Abbot, Missionary was born inIreland, he went first with his brothers Foillan and Ultan to live the monastic life in East Anglia. But as large numbers continued to visit him there he left his brother Foillan as abbot, and sought refuge in France around 644. A patron gave him a hermitage at Lagny on the Marne. He died about 650 at Mezerolles while on a journey. His body was buried in Peronne, which became a centre of devotion to him. 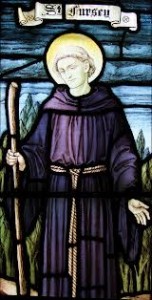 Fursey was born on the small island of Inchiquin in Lough Corrib, Co Galway. The parish of Headfort, Co Galway, in Tuam archdiocese has a section called Killursa (Cill Fhursa = the cell or church of Fursey). Pádraig Ó Riain, however, in his new Dictionary of Irish Saints (2011) says this may have been a propaganda tradition developed in the twelfth century or later to legitimate the relationship between the O’Duffys and the episcopal see of Annaghdown in that area. He thinks Fursey could be linked to Co Down and the offspring of St Brónach of Kilbroney.

In Norfolk (East Anglia): relations with the Roman mission?
According to Bede’s Ecclesiastical History of the English nation, Fursey founded a monastery at Rathmat, probably in Ireland, and then went with two companions St Foillan and St Ultan as a pilgrim for Christ (peregrinus pro Christo) to East Anglia. King Sigbert II of the East Anglians, who had been an exile in Gaul, received the pilgrims courteously and gave them land at Burgh Castle, near modern Yarmouth, where Fursey founded a monastery.

Felix of Felixstowe
This would have been around the same time as the Roman mission to England under St Augustine arrived in Kent (597). However, neither the Roman mission nor the mission from Lindisfarne seems to have reached East Anglia by the time Fursey arrived. King Sigbert must have been aware of the differences between Celtic and Roman practices, because he also welcomed a Burgundian bishop named Felix, who died in 647. Felix established a Roman diocese named Dunwich, but this has now disappeared under the North Sea as a result of coastal erosion. All the records were lost, and the only remaining trace of his mission is the name of the port of Felixstowe. Sigbert seems to have thought that there was room for both Celtic and Roman missioners in his large, predominantly pagan, kingdom. 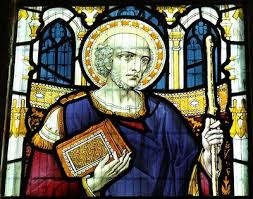 or his asceticism
Fursey and his community stayed around Yarmouth for about twelve years, following the Celtic Rite. Felix was a faithful missionary, and evidently tolerant of the Celtic monks and their ways. The Roman clergy who came to the area respected Fursey for his devotion and his visions: he was given to sitting out in the biting East Anglian winds wearing only a thin shirt, and sweating with the power of his spiritual experiences.

Bede the Venerable  says of Fursey:

There came out of Ireland a holy man called Fursa, renowned both for his words and actions, and remarkable for his singular virtues, being desirous to live like a stranger for our Lord, wherever an opportunity should offer… he saw the angels chanting in heaven, and a vision of hell in which he saw four fires – the fire of falsehood, the fire of covetousness, the fire of discord and the fire of iniquity.

Here King Clovis II ( 636-657) authorised  Fursey  to found a monastery east of Paris at Lagny-sur-Marne (Latinacium or Lagny-en-Brie) in the territory of Neustria (648). In the monastery he created three chapels. He was protected here by Echinoald, the administrator of Clovis II.

Death and influence
After Fursey’s death while on a journey at Mezerolles in 650, Echinoald had his body translated to Péronne, which became known as Perrona Scottorum (Péronne of the Irish). His tomb became a place of pilgrimage and the monastery became an Irish centre. Ultan went there, and became abbot. Fursey’s shrine is said to have been the work of St Eloi (Eligius, c. 588-660), a celebrated metalworker who also made the shrines of St Denys of Paris and St Martin of Tours.

The entry for Fursey in the Félire of St Oengus seems to make reference to his friendship with kings:

Fursey’s companions in England
Two other companions of Fursey were said to have accompanied him to England, Dicul and Maeldubh.

Dicul went on to evangelise the South Saxons, and founded a monastery at Bosham, near Chichester, with five or six monks. Later Wilfrid of Ripon, during his travels, discovered this small group of Celtic monks still keeping to their old ways in what by then was solidly Romanized territory. Maeldubh went to Wessex, and founded a monastery at Malmesbury, where St Aldhelm (639-709) is said to have studied for a time.

Though little seems to be known about the work of these small Celtic groups in the Anglo-Saxon kingdoms, their existence does suggest that there was a significant movement of evangelising from Ireland into England in the early seventh century, and that the Roman clergy in England may have encountered Celtic monks quite early in their own mission.