Summary:  Abbot Fintan was born in Leinster. He received his religious formation in Terryglass, County Tipperary under the abbot Colum, and was deeply influenced by his penitential practices and the severity of the Rule. Fintan made his own foundation in Clonenagh, County Laois. He died in 603.

St Fintan‘s monastery at Clonenagh had a reputation for austerity, 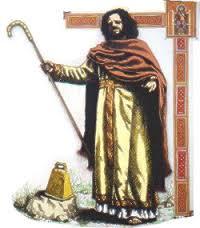 so it is not surprising that St Comgall of Bangor and the founders of the Céilí Dé reform monastic movement had their training here.

Two Fintans
There are at least two Fintans among the Irish saints – St Fintan of Clonenagh, Co Laois, and St Fintan of Taghmon, Co Wexford. A third is associated with Doon in Co Limerick.

Formation at Terryglass
Our Fintan was educated by St Colum of Terryglass, Co Tipperary, the severity of whose Rule and penitential practices so influenced Fintan that his own foundation in Clonenagh, Co. Laois, also acquired a reputation for austerity.

Bread of woody barley
According to Oengus, Fintan himself lived on “bread of woody barley and clayey water of clay”. The community did not have even one cow and so they had neither milk nor butter. The monks complained they couldn’t do hard work on such a meagre diet. A deputation of local clergy headed by Canice of Aghaboe came to urge him to improve it. He agreed for his monks, but he elected to keep to the strict diet himself.

Another version says that, warned by an angel, he prepared a great feast for the deputation with plenty available as long as they stayed, but when they went away, all reverted to as it was before. In spite of the hardships, or maybe even because of them, the monastery was crowded with young monks from all over Ireland. 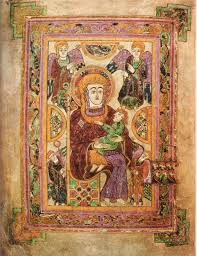 Saint Oengus the Martyrologist on the Nativity of Christ

Among those trained by Fintan at Clonenagh was St Comgall, who founded his own monastery at Bangor, where he trained Columbanus and a host of others who brought monasticism to Europe. Oengus, an associate of St Maelruain of Tallaght as leaders the Céilí Dé reform movement, was born, educated by Fintan, lived and died at Clonenagh.

The pact of the two Fintans
The Martyrology of Oengus tells that Fintan of Taghmon, who was also called Munnu, and Fintan of Clonenagh formed an oentas (or pact) that the name of each of them would be given to the other, in commemorationem societatis. Munnu was the baptismal name of the man from Taghmon. He took on the name Fintan, while Fintan of Clonenagh took Munnu or Munda as a second name. Not surprisingly this led to some confusion.

For St Munna / Fintan of Taghmon, and another perspective see http://homepage.eircom.net/~taghmon/histsoc/vol2/8munnac/8munnac.htm