St Felim of Kilmore (1) 6th century patron of Kilmore diocese. Very little is known about this hermit Felim around whom a monastery grew up and later a cathedral.

Patrick Duffy explains some of the background. 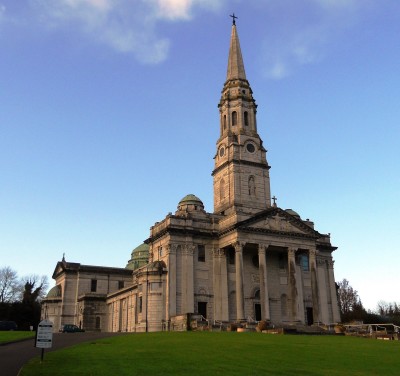 Felim or Feidhlimidh seems to have lived in the 6th century as a hermit and then founded a monastery at Kilmore (Irish Cill Mór, meaning “Big Church”) 5 kms from where Cavan town is now situated.

Diocese of Kilmore
Little is known about Felim. The diocese, roughly co-terminous with the Kingdom of Breifne, was formally established at the Synod of Kells in 1152 and Felim he became its patron. The diocese includes almost all Cavan and about half of Leitrim, but also extends into Fermanagh, and has half a parish in both Meath (Kilmainham Wood) and Sligo (Ballintrillick).

Cathedral
About the year 1400 a church was built near the site of the present Church of Ireland Cathedral of St Felim at Kilmore. It was 70 feet in length and 24 feet in breadth and its high-pitched roof was covered with oaken shingles. In 1454, the Bishop of Kilmore Andrew MacBrady (1445-55), with the approval of Pope Nicholas V, made this church his cathedral. It was probably this church which gave its name to the parish and the diocese. This was taken over by the Anglican (Church of Ireland) Communion at the time of the Reformation but by 1858 it had fallen into disrepair and a new cathedral was built.

Cathedral in Cavan
The present  Cathedral of Saint Felim and Saint Patrick, located on Farnham Street in Cavan town, was begun in the 1900s and completed in 1947. St Felim’s feast is celebrated on 9th August.