Summary of St Ephrem: Deacon and Doctor of the Church was Born in Nisibis (Iraq) about 306; died at Edessa (Turkey) on this day in 373. A noted teacher, exegete, and theologian; a prolific poet, writer, and composer of liturgical songs. Called the “Harp of the Holy Spirit.” Noted for his poetic and dogmatic works, for his holy and ascetical life, and for his devotion to the Virgin Mary. 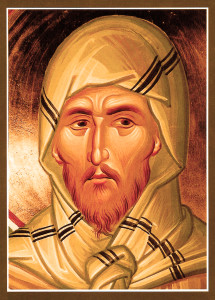 Many of the writings of St Ephrem of Syria are still extant. He greatly influenced the Eastern liturgy. He also knew how to exploit the power of hymns in communicating the Christian message and in combatting heresies.

Early life
Born at Nisibis, which is today in eastern Turkey near its border with Syria. At that time it was part of the Roman province of Mesopotamia. He was baptised at the age of eighteen and became a pupil of Bishop James of Nisibis, and probably accompanied him to the Council of Nicaea (325).

Christian teacher at Nisibis
Back home, James appointed Ephrem a teacher at Nisibis. He began composing hymns and to write biblical commentaries. His hymns were later incorporated into the liturgy. He became head of the school of Nisibis and was certainly ordained a deacon, if not a priest.

At Edessa
After the death of Constantine in 337 Nisibis was frequently attacked by the Persians and many of Ephraem’s hymns reflect this. He eventually had to move as a refugee to Edessa (363) – also in eastern Turkey – where he continued his work as a teacher. Because the city became the centre of so many rival philosophies and theologies, Ephraem continued his hymn-writing in defence of the true Nicene doctrine that Jesus was at once both human and divine.

A “member of the covenant”
Although he is sometimes described as a monk, it is more likely that both at Nisibis and at Edessa Ephraim was one of a close-knit community of Christians called the “members of the covenant”, who had committed themselves to service of the Church and sexual abstinence.

Fair distribution during the famine
A famine hit Edessa in 372. Ephrem was horrified to learn that some citizens were hoarding food. When he confronted them, he received the age-old excuse that they couldn’t find a fair way or honest person to distribute the food. Ephrem volunteered himself and no one objected. He and his helpers worked diligently to get food to the needy in the city and the surrounding area.

The power of hymns
According to tradition, Ephrem began to write hymns in order to counteract the heresies that were rampant during his time, having already heard the heretical ideas put into song first. He stresses especially the unity of the humanity and the divinity in the person of Jesus. 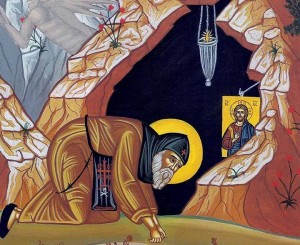 The originality, imagery, and skill of his hymns captured the hearts of the Christians so powerfully that Ephrem is given credit for awakening the Church to the importance of music and poetry in spreading and fortifying the faith. Many of his hymns are still used in the Orthodox liturgy.

Death and veneration
June 9, 373 is accepted by many as the date of his death. Pope Benedict XV declared him a doctor of the Church in 1920.

Prayer
Saint Ephrem, sometimes we treat the power of song lightly.
Help us to open our hearts and souls to the inspiration of the Holy Spirit
given us through music. Amen.