Summary: St Elizabeth, of the house of Aragon, had an unhappy marriage with the King Denis of Portugal. When he died, she persevered in prayer and good deeds and as widow lived in poverty as a Franciscan tertiary. She is the Patroness of Catholic Charities. 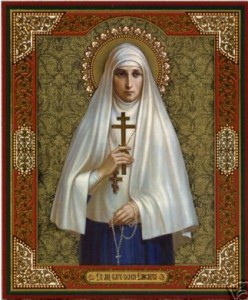 Elizabeth: an agent of peace
Elizabth both in her own family and between the nations of Portugal and Spain. She cared for lepers with her own hands and had an extraordinary knowledge. She also engaged in building projects: 20th century scholars identify an “isabeline” style of architecture called after her.

Marriage to King Denis of Portugal
Elizabeth, or Isabel, was born in Saragossa, Spain, in 1271, the daughter of Peter III, king of Aragón and Queen Constanza. She was christened Elizabeth after her great-aunt Elizabeth of Hungary. Many European monarchs sought to have her as a bride for their sons and one must wonder how much she understood when at the age of twelve she was married to King Denis of Portugal who was then twenty.

Family
Elizabeth and Denis had two children. Their daughter, Constanza, was born after the couple had been married for eight years, and Afonso, the crown prince, a year later. But Denis fathered seven other children by other women. Elizabeth agreed to care for these and educate them.

Family troubles
One of her greatest trials, however, was that her own son Afonso allied himself with the Spanish kingdom of Castile in a bid to overthrow his father, who, he felt, favoured one of his half-brothers. Elizabeth had to mediate between the two men closest to her heart, husband and son, each of whom led an army. Denis, believing that his wife was intriguing against him, had her exiled to the fortified city of Alenquer. She accepted this and at times did succeed in bringing peace between them.

Elizabeth’s devotion
Elizabeth regularly attended the Liturgy of the Hours and sometimes even corrected the Latin of the clerical chanters. In 1320, she obtained from the bishop of Coimbra a proclamation establishing the solemn observance of the feast of the Immaculate Conception of Mary on 8th December throughout the whole country.

Her building projects
She also engaged in a number of building projects.  She had a convent built in Coimbra to house the Poor Clare nuns, as well as a house for herself next to the convent, a hospice for the aged poor, a hospital and an orphanage. She drafted the sketches herself, and managed the day-to-day progress of the projects. Twentieth-century scholars have identified the buildings that date back to Elizabeth by their common architectural features, speaking of an “isabeline” style of architecture.

Caring for lepers
Elizabeth would at times bring lepers to her private room, wash and bandage their wounds, replace their rags with clean clothes and serve them with a meal. One Good Friday, as the lepers were going away, one of them, unable to keep up with the rest, fell at the main entrance, where the doorkeeper found him. Not knowing of the queen’s secret works of mercy, the doorkeeper rebuked the sick man and hit him on the head with a stick.

Egg-white and effective remedy in healing wounds
One of the queen’s servants saw the incident and reported to the queen that the wounded man was bleeding profusely. Elizabeth immediately had him brought to a secluded room, where she washed the gash on his skull, and applied egg-white before bandaging it. When, the next day, the leper announced that he had no more pain, that the wound was closed and healed, the rumour spread that the queen had performed a miracle. Doctors have commented on this episode,praising Elizabeth’s medical knowledge. It seems that the protein and fibrinogenic components in egg-white can be an effective remedy for a bleeding wound. In 1779, the Portuguese Academy of Sciences chose St. Elizabeth as its patron saint. 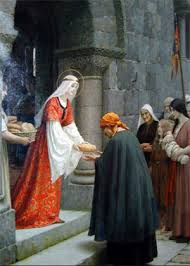 Widowhood and death
King Denis became ill in 1324 and died the following year. Elizabeth nursed him and he was obviously repentant. After his death she went on pilgrimage to Compostela and, although she wanted to become a Poor Clare nun, she remained a Franciscan tertiary. She retired to the house she had built near the Poor Clare convent at Coimbra and devoted herself to the care of the needy.

Peace-making and death
In 1336 Elizabeth’s son, now King Afonso IV, went to war against Alfonso XI of Castile. Elizabeth was again able to make peace, but it wore her out and she died before she was able to return home.

Feast and canonisation
Pope Leo X authorised the celebration of her feast locally in 1516: Pope Urban VIII canonised her in 1626.