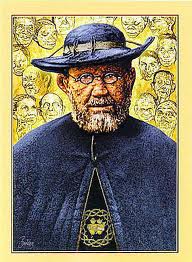 Summary: St Damian the Leper:D a Missionary of the Sacred Hearts of Jesus and Mary from Belgium, went to the leper colony island of Molokai near Hawaii and died there in 1889.

A  pious Belgian farming family
Joseph De Veuster was born in Belgium into a pious farming family. Two of his sisters became nuns and one brother a priest. Joseph followed his brother into the Order of the Sacred Hearts of Jesus and Mary. He joined their community at Louvain and took the religious name of Damian. At first he was considered too uneducated to go for the priesthood, but his brother taught him Latin and that decision was reversed. His brother was due to go on mission to Hawaii, but became ill and Damian offered to go in his place.

To Honolulu and Molokai
The sea-voyage to Honolulu took five months and Damian was ordained shortly after he arrived. He worked in two mission stations on the islands for nine years and then volunteered to go to the leper colony on Molokai where there were 800 lepers. The bishop planned to rotate the priests on the island every three months to minimise the risk of infection. But Damian said he would go and stay.

No cure for leprosy then
There was no cure for leprosy at that time and it was thought to spread mainly through sexual contact. There was little to engage the lepers on the colony: they just sat and drank. While there was a hospital and occasional visits from a government doctor, Damian tried to improve living conditions, begging clothes and insisting on ordinary hygiene. His work received publicity and support and from 1878 he received help from another priest.

“The happiest missionary in the world” 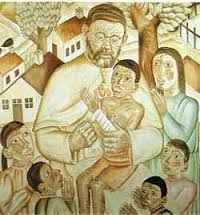 Like many pioneers he met with disapproval which he partly brought on himself, since he thought he knew best and had become somewhat autocratic. There was also envy in government and church circles at the amount of money he was receiving. He had worked with the lepers for twelve years when he himself was diagnosed with the disease. This brought accusations of sexual impropriety, humiliating medical tests and he was forbidden to leave the island. Visitors stopped coming and he was deprived of the opportunity of confession. For a while he was in desolation, but soon became reconciled and described himself as “the happiest missionary in the world”. 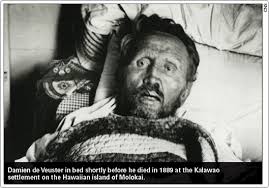 Gradual change in attitude towards him
Attitudes towards Damian gradually changed. He was allowed to spend a week in Honolulu where the king, the prime minister and the bishop visited him. More assistants joined him, including a layman, Joseph Dutton, who stayed for forty years. Eventually the leprosy progressed and Damian died on 15th April 1889 aged forty-nine.

Canonisation
In 1936 Damian’s remains were taken to the Church of the Sacred Hearts in Louvain, the year he was beatified. Pope Benedict XVI canonised him on 11th October 2009.