Summary of St Charles Lwanga and 22companions : died on this day in 1886. Between 1885 and 1887, these martyrs were among many newly baptised Catholics and Anglicans who were killed for their faith and virtue in Uganda by a debauched and brutal ruler. They included judges, catechists, soldiers, and teenage pages under the leadership of Charles Lwanga, who was burned alive. Noted for the heroic calm of their fidelity to Christ. 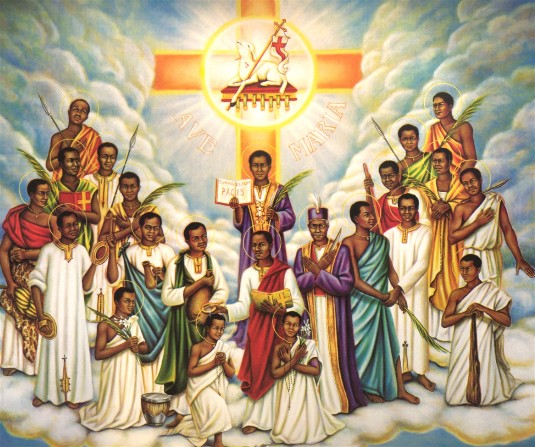 There were martyrs in North Africa at the start of the third century. Two young married women, Perpetua and Felicity, thrown to wild animals in Carthage in 202, are mentioned in the Roman Canon.

The Uganda Martyrs are the first martyrs in the second wave of evangelisation of Africa in the 19th century.

Colonisation and missionary activity
Although directly the Uganda martyrs were the victims of a cruel dictator, indirectly they were also the victims of the fear of loss of a way of life felt by native societies when colonisers and missionaries move in. The Society of Missionaries of Africa (White Fathers) were the first Catholic missionaries to reach southern Uganda in 1879. They were well received by the king, Mtesa, and the mission flourished till he died in 1884.

King Mwanga
His 18 year old son, Mwanga, then became king and though he had attended a mission school, he had not succeeded – for whatever reason – to learn to read and write, which did not help his self-esteem. Exploiting the fear of cultural change, the traditional advisors told him the ancestors were angry at how foreigners were taking over the country.

First victim: an Anglican bishop
His first victim was an Anglican bishop, James Hannington, who when travelling to Uganda passed through land closed to white people. He was seized on the pretext of spying and, after keeping him for a week as a trophy, Mwanga had him killed. The king was drinking heavily, smoking hemp and given to homosexuality, which he is said to have learned from white traders.

First indigenous victims – new converts, the pages of the king
At Mwanga’s court there were a number of Christian converts who acted as pages. Their leader was Joseph Makasa, a newly converted Catholic. He tried to defend the younger pages from the advances of the new king. He also rebuked the king openly for the murder of Bishop Hannington. He was beheaded on 15 November 1885.

Charles Lwanga, another Catholic, took over as master of the pages and for a time protected them from the desires of the king. One day, however, King Mwanga called one of his pages named Mwafu and asked him what he had been doing that kept him away from Mwanga. He replied that he had been receiving religious instruction from Denis Sebuggwawo. Denis was summoned to the king who killed him, thrusting a spear through his throat.

Massacre at Namugongo
Alerted and angered by this catechetical activity, the king ordered all the pages to be rounded up. The Christians were separated from the others and asked if they intended to remain Christians and when they all said they did, Mwanga ordered them to be taken to a traditional place of sacrifice 37 miles away called Namugongo and put to death.  Three were killed en route. When the others arrived they were forced to construct a pyre on which they were burned alive, a huge group of Catholics and Protestants, boys and men. Among them was Charles Lwanga and the youngest was a thirteen year old boy whom he had baptised – Kizito, who went to his death “laughing and chattering”. Other victims whose names are known were Matthias Murumba, a judge, and Andrew Kagwa, a prominent catechist.

Blood of martyrs the seed of Christians
Of the martyrs that could be formally accounted for, twenty-two were Catholics and twenty-three Anglicans. These massacres led to a great increase in converts to Christianity. The Catholic martyrs were beatified in 1920 and canonised in 1964 during the Second Vatican Council by Pope Paul VI. Later in 1969 he was the first pope to visit the Catholic shrine at Namugongo.

Father, you have made the blood of the martyrs the seed of Christians. May the witness of St Charles and his companions and their loyalty to Christ in the face of torture inspire countless men and women to live the Christian faith. 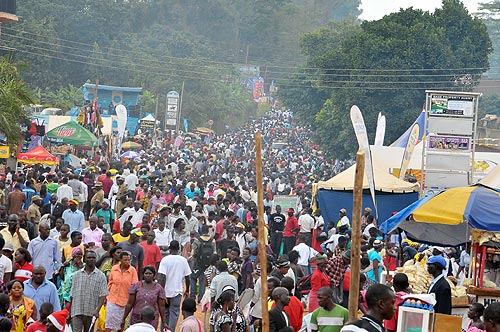