Catherine received the stigmata on the fourth Sunday of Lent, 1375, although the marks remained invisible until after her death.

Summary : St Catherine was a remarkable woman in Renaissance Italy. She refused her parents’ arrangements for her to marry and went into isolation for three years. She gathered a huge following of friends and disciples. She persuaded the Pope to come back from Avignon to Rome and gave herself in service of the Church and the poor. 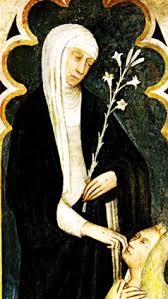 Catherine was born in 1347, the youngest daughter of a prosperous Sienese wool-dyer, Giacomo Benincasa. A lively good-looking girl, in adolescence she became attracted to prayer and solitude, resisted her parents’ attempts to get her to marry, cutting off her beautiful golden hair.

Three years’ isolation and a mystical marriage
Catherine joined the third order of St Dominic, wore the black and white habit but stayed at home. For three years she never left her room, except to go to Mass and confession, and spoke to no one except her confessor. “My cell will not be one of stone,” she said, “but one of self-knowledge.” 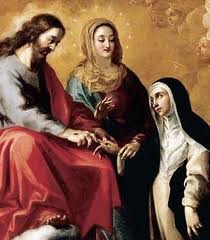 She received a vision of Christ, who told her: “Know, daughter, that I am He who is, and you are that which is not.” From this she developed her sense of her vocation and her spiritual life. She trained herself to live on a spoonful of herbs a day and a few hours’ sleep every night. On Shrove Tuesday 1367 while the town of Siena celebrated Carnivale, she remained praying in her room where she experienced a mystical marriage with Jesus. Jesus appeared to her and placed a ring on her finger, visible only to herself.

A  following – ‘Caterinati’
After three years she resumed her share of the housework at home and began to mix with other people, first through nursing the sick and helping the poor. She soon had a following – men and women, friars and priests – attracted as much by her gifts of discernment and asceticism as by her lively personality and personal charm. The people of Siena, puzzled by all this coming and going around a young woman with a reputation for holiness, called them the ‘Caterinati’, of “Catherine followers”. Affectionately they called her Mama.

Call as peacemaker
In 1370 she experienced a kind of mystical death with a vision of hell, purgatory and heaven followed by a divine call to enter the public life of the world. She began dictating letters through secretaries to contending parties in disputes advising them on the performance of their duties. She never learned to write herself until quite near her death. At first she served as a local peacemaker, mediating between feuding families in Siena. But soon she was called to make peace in the armed conflict between the city of Florence and the Avignon-based papacy. 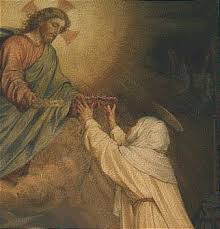 The Popes had been in Avignon since 1309 and were strongly under the influence of France. The Italian cities were at strife with the French papal legates. When Florence declared war on the papal states in protest against the legates’ rule, eighty towns joined them in ten days. While Catherine was in Pisa, working in the cause of peace, she received the stigmata on the fourth Sunday of Lent, 1375, although the marks remained invisible until after her death.

At Avignon
At a certain stage in this war, Florence asked Catherine to go to Avignon to intercede with Pope Gregory XI on behalf of their embassy. She agreed and went with twenty-three members of the ‘bella brigata’, including four priests, to Avignon arriving in May, 1376 where she stayed for four months.

It was a difficult time for Catherine. The prelates of the inquisition harassed her with examinations in doctrine; the women of power made fun of her and the Florentine ambassadors did not accept her mediation. But Pope Gregory XI listened to her. She understood the irresolution of his character and finally succeeded in getting him to do what he had already decided in his heart he ought to do – go to Rome.

The Papacy restored to Rome
Pope Gregory XI left Avignon for Rome the following September, but died within a year. The Romans rioted, demanding a Roman pope. The cardinals elected a Neapolitan, Urban VI, who soon proved so arrogant, over-zealous and prone to violent outbursts of temper that the French and other cardinals regretted their action. But failing to persuade him to resign, they withdrew to Anagni and elected a second, in fact an anti-pope, who went to live in Avignon, Robert of Geneva (Clement VII), thus starting the great western Schism which lasted for the next forty years.

Loyal to the belligerent Urban VI
Catherine remained loyal to the belligerent Urban VI and at his request went to Rome to work to restore unity. She frequently wrote letters to him urging him to moderate his harshness and to various European leaders and the cardinals to whom she pleaded to recognise him as the authentic pope. But she felt the wound in the body of Christ could only be healed by a great sacrifice.

Her death and influence
One evening in January, 1380, while dictating a letter to Urban, she suffered a stroke. It seemed as if the church, like a mighty ship, was placed on her back. She had a second stroke while at prayer in St. Peter’s and died three weeks later on April 29th, 1380, aged thirty-three. She was buried under the high altar in the Dominican church of Santa Maria sopra Minerva, but her head was afterwards removed and taken to Siena, where it is enshrined in the Dominican church. Her friend, Raymond of Capua, later Master General of the Dominicans, wrote her life, which was influential in leading to her canonisation in 1461 by the Sienese Pope Pius II (Enea Silvio Piccolomini).

Writings
Before leaving Siena for the last time, she dictated a book called The Dialogue of St. Catherine; this and her four hundred Letters comprise a great treasury of spiritual writing.