Summary of St Camillus: As a young soldier, Camillus was rough tempered and a gambler who when he was twenty five was converted by St Philip Neri. He became a priest and worked for the sick. He founded an order, the Servants of the Sick and a series of hospitals where many otherwise “incurable” patients could go.

The Camillians are a religious order founded by St Camillus de Lellis, who try to “bear witness in the world to Christ’s ever-present love for the sick” (Constitutions). Camillians serve in Italy, Europe, America and worldwide.

Patrick Duffy tells the story of their founder.

A soldier and a gambling addict
Born in Chieti in the Abruzzo region of Italy, as a young man Camillus joined the army first of Venice and then of Naples. But when his company was disbanded, he became addicted to playing cards and gambling. He lost everything he had and then got a job driving two asses at a building site for the Capuchins. He applied to become a novice, but was rejected because he had a running sore on his leg that was judged incurable. At this stage he saw the foolishness of his ways, repented and began to live a life of penance.

His project of care for the sick
Camillus went to Rome and began to care for patients at the Hospital of St James for Incurables, where he had previously been a patient. When the administrators saw the quality of his work, they appointed him director of the hospital. He had the idea of getting people to care for the sick out of charity, and set up a house with two like-minded companions. They got financial support from some wealthy patrons and worked initially at the Hospital of the Holy Spirit in Rome. St Philip Neri (1515-95) helped Camillus spiritually. Despite all the help he got, Camillus found it difficult to put his project into effect, so he decided to study for the priesthood and was ordained a priest in 1584. 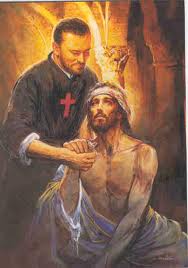 A religious congregation
Soon Camillus began to think of a religious congregation and a rule for a community was approved in 1586. Besides vows of poverty, chastity and obedience, they had a fourth vow, namely, to provide both physical and spiritual help to the sick, those infected with the plague, and to prisoners. The members of the order wore a black garment with a red cross on the chest and were urged to see and serve Christ in every sick person they met. Camillus opened a new house in Naples and sent members to nurse the wounded in battles in Croatia and in Hungary.

A professional approach
Camillus insisted on professional standards of care – isolating those with infectious diseases, the provision of a good diet, always seeking a cure, as well as providing for their spiritual welfare. He also stressed that the last moments of a life are the most precious.

His own suffering and death
Camillus himself suffered from a number of long-term illnesses, but despite this, spent most of his time in serving the sick and in prayer. He resigned from being the superior general of the order in 1607, but the order continued to expand both in the cities of Italy and in Hungary. He died in 1614 and was buried in the Church of St Mary Magdalen in Rome. Pope Benedict XIV (Lambertini) canonised him in 1746.