Summary: St Athanasius Bishop and doctor of the Church: Born in 295. Buried on this day in 373 at Alexandria (Egypt). Attended the first ecumenical council of Nicaea as a deacon. Later, as bishop of Alexandria, he upheld that council’s doctrine in the face of opposition from Arians, including several emperors. Sent into exile a number of times. Venerated as the “Father of Orthodoxy” for championing the true and equal divinity of the incarnate Son of God. 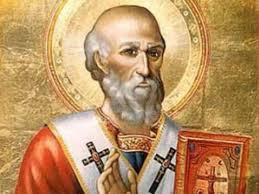 Seen in the West as defender of orthodox doctrine about Jesus and the Trinity, Athanasius is valued in the East more for his ascetic and mystical writings. A friend of the hermits Ss Antony and of Pachomius who first organised monks to live in common, Athanasius was himself exiled four times, but died peacefully at Alexandria the age of seventy seven in the year 373.

Patriarch at 32
Born in Alexandria, while still a deacon Athanasius had been secretary and companion to his predecessor, Alexander, at the Council of Nicea 325, when the Arian heresy was condemned. When Alexander died in 328, Athanasius became patriarch in Alexandria. Some extremist followers of Athanasius attacked and killed some Arian dissenters in the city. Although not personally involved, Athanasius was exiled by the Emperor Constantine to Trier (in Germany). 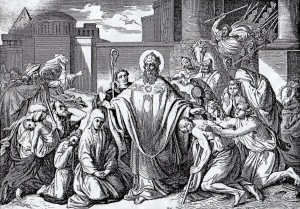 It wasn’t until after Constantine’s death in 337 that Athanasius was able to return to Alexandria, and even then he had a lot of opposition to contend with. He made extensive pastoral visits through his patriarchate, striving to improve the spiritual life of his people through preaching and spiritual writing. Monks and nuns were many. But in 356 there was a fresh outbreak of Arianism supported by Constantius, Constantine’s son, and Athanasius had to flee Alexandria for three further periods – from 339-346 in Rome and twice (356-61, 362-3) in country districts near Alexandria. Only for the last seven years of his life did he have peaceful charge of his church.

His writings
Athanasius’s basic theological works are Against the Arians and On the Incarnation. His Against the Arians is a work of controversial theology. His Life of St Antony had a great influence on western monasticism and became a model of hagiography in the Middle Ages. His Festal Letters, directed to his community to prepare them for Easter, were discovered in a Syrian translation in Egypt in the mid 19th century. The 39th Festal Letter is the earliest source we have for what came to be known as the Canon of Scripture, that is, the books the Church regards as inspired and canonical and so authoritative.

Death and influence
Athanasius’s emblem shows a stole draped over a triangle symbolising his office as bishop and his defence of orthodox doctrine on the Trinity. His ascetical writings promoted the ideals of monasticism and virginity as effective means of restoring the divine image in fallen humanity. Despite having spent so much of his life in exile, he died peacefully at Alexandria in 373. With Basil the Great, Gregory Nazianzen and John Chryostom he is invoked and honoured in iconography as one of the four doctors of the Eastern Church.