Summary: St Anthony Claret, Bishop.Born in Sallent (Spain) in 1807; died in exile in France in 1870. Spent more than a decade preaching missions and retreats in Catalonia, and founded a religious institute, later known as the Claretians. He was appointed archbishop of Santiago (Cuba) where he aroused opposition for his spiritual and social reforms and for championing the rights of the indigenous peoples. Finally, as chaplain to Queen Isabella II, drew the arts and sciences into his missionary endeavour. Noted for his work through the spoken and printed word. 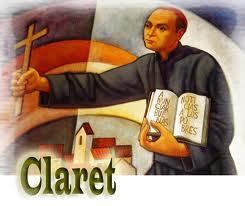 There are 3,100 Claretian missionaries working in sixty-five different countries around the world. Founded in Spain by St Anthony Mary Claret in 1849 as the Sons of the Immaculate Heart of Mary, the initials of each member is CMF (Cordis Mariae Filius = “Son of the Heart of Mary”).

Patrick Duffy tells the story of the founder.

Anthony was born in Catalonia, Spain. His father was a weaver and Anthony also trained as a weaver. But when he was twenty-two, he entered the seminary at Vich and was ordained a priest six years later in 1835. After working for a while in his home parish, he went to Rome to work for the Propagation of the Faith. In Rome he entered the novitiate of the Jesuits but had to leave because of ill health. He returned to Spain and was assigned as pastor in his home parish. He spent ten years giving missions and retreats in Catalonia. As well as preaching, he wrote many books and set up a religious publishing house.

On mission in Gran Canaria
In 1848 when his life was threatened, Anthony’s bishop sent him to the Canary Islands where he preached with great success and touched the hearts of many of the people. After a year he returned to Catalonia and in the following year gathered together five priests who formed the basis of the Missionary Sons of the Immaculate Heart of Mary (popularly known as Claretians). He also founded the great religious library at Barcelona, now Libreria Claret. 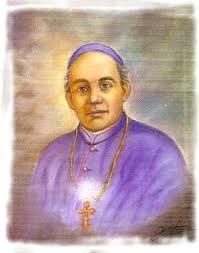 Archbishop of Santiago, Cuba
At the suggestion of the Queen of Spain, Isabella II, Anthony was named archbishop of Santiago, Cuba (1850). For the next seven years he made pastoral visitations, reorganised the seminary, boosted the morale and zeal of the clergy. preached against slavery, and regularised marriages. As a result of his activity he was frequently threatened with death and on one occasion an attempt was made on his life.

Confessor to Queen Isabella II
In 1857 Anthony was recalled to Spain to be confessor to the queen. He reluctantly accepted this and became rector of the centre for ecclesiastical studies at the Escorial near Madrid. In 1868 when Queen Isabella II went into exile in Paris, Anthony went also.  In 1869 he was in Rome, preparing for the First Vatican Council. At the insistence of the Spanish ambassador, he was placed under house arrest in the Cistercian monastery at Fontfroide near Narbonne, where he died at the age of 63. His remains were ultimately returned to Vich.

Message and relevance
The patience of St. Anthony Claret was tested in the political upheavals of the nineteenth century, both in his native Spain and in Cuba. His efforts at reform stirred up a great deal of hostility.