Summary Of St Aloysius Gonzaga:  , an Italian aristocrat who became a member of the Society of Jesus. While still a student at the Roman College, he died as a result of caring for the victims of a serious epidemic. Pope Benedict XIII canonised him. In 1926 Pope Pius XI named him the patron saint of Catholic youth. 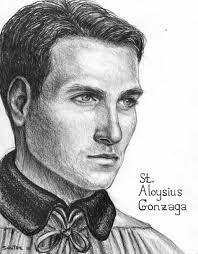 St. Aloysius was born of a noble Italian family in Castiglione, near Mantua, Lombardy. He was the eldest son of the Marquis Ferrante Gonzaga; his mother Marta Tana was of the della Rovere family – Popes Sixtus IV (1471-1484) and his nephew  Julius II (1503-1513) – and was lady-in-waiting to the queen of Spain. As a child his father trained Aloysius for a military career and had him dress as a soldier and take part in military parades. Where his father was rough and domineering, his mother was gentle and religious.

Time on his own

As a boy Aloysius was sent to be a page and to be educated at the court of Francesco de Medici at Florence. Here, a kidney infection began to trouble him and stayed with him all his life, but it also gave him time to be on his own when he began to read about the saints. He also began to pray and and practise penance. Often he would be in the Church of Our Lady of the Annunziata, praying in front of her picture. He wanted to honour Mary with a gift, and he decided on a vow of perpetual chastity. 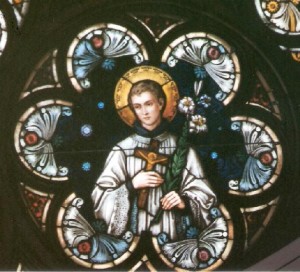 The Gonzaga family was called to Spain in 1581 where his mother attended on the queen. Aloysius and his brother Ridolfo were pages for the infante Don Diego (1575-82). It was at this time, after reading a book about Jesuit missionaries in India, that he decided to become a missionary and join the Jesuits.

His desire to join the Jesuits
His mother was happy, but his father was horrified and for three years withheld his consent and tried through many relatives, clerical and lay, to get Aloysius to change his mind. Finally, in November 1585, his father consented and Aloysius gave over all rights of inheritance to his younger brother Ridolfo.

Novitiate
Aloysius went to Rome and met Pope Sixtus V (Felice Peretti di Montalto pope 1585-90) who, after questioning him about his desire to enter the Jesuits, gave him his blessing to enter the novitiate in Rome. Here his superiors urged him to pray less, eat more, and be more sociable.

Father’s death and and mediator in family dispute
Soon after this, in 1586, his father Marquis Ferrante Gonzaga died. He had undergone quite a change of character since his son had entered the novitiate and was at peace with God, with himself and with his son’s decision. Aloysius went for some time to Milan for studies, but was back in Rome in 1587, where he took first profession and minor orders. He did return to Mantua to sort out a family quarrel and debts for the Duke – a significant task for a young man of twenty-one. But he had an integrity that was visible to all who knew him.

Caring for the sick and death 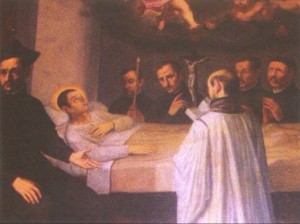 A plague broke out in Rome in 1589. The Jesuits opened a hospital for the victims, and Aloysius volunteered to work there. He begged in the street for food for the patients and nursed them in the hospital. He caught the plague himself and became very ill. He still avoided all comforts – like medicine to soothe his cough. He was excited that death was approaching and he would soon be with God. He foretold that he would die in eight days at the end of the Octave of Corpus Christi. On that day, which fell on 21st June, Aloysius seemed very well in the morning, but insisted that he would die before the day was over. Fr Robert Bellarmine, who had become his spiritual father, gave him the last sacraments, and recited the prayers for the dying. Aloysius died just before midnight on 21st June 1591 at the age of twenty-three.

Assessment
Gonzaga is sometimes dismissed as a prig, naive, sickly and unattractive. His custody of the eyes and his vow of chastity at a young age are often mocked as showing a disdain of women, as in James Joyce’s The portrait of the artist as a young man.  But to preserve his virginity in the cultural context he grew up in was a significant achievement.

The role of chivalry
Steeped as he was in the code of chivalry from his family background, (like St Ignatius of Loyola), it is not surprising that Aloysius chose always what gave greater glory to God.  See Brian O’Leary SJ To the greater glory. To him in a strange way could be applied the lines of poet Patrick Kavanagh:

He knew that posterity has no use
For anything but the soul,
The lines that speak the passionate heart,
The spirit that lives alone.
O he was a lone one,
Fol dol the di do,
Yet he loved happily
I tell you.

Canonisation and Patron of Catholic youth
On December 31, 1726, Pope Benedict XIII canonised Aloysius Gonzaga together with another Jesuit novice, Stanislaus Kostka. In 1926 Pope Pius XI named him the patron saint of Catholic youth. 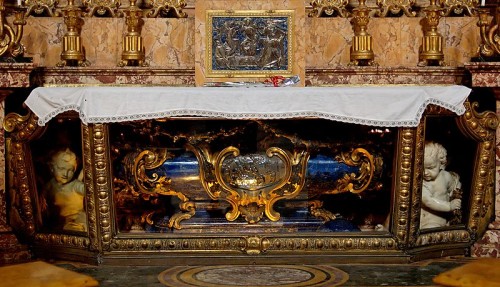 Tomb of St Aloysius Gonzaga in the Church of Saint Ignatius, Rome