Summary: St Adelaide of Burgundy. Possibly the most prominent European woman of the tenth century, her second marriage was to Otto the Great of Germany, the Holy Roman Emperor. She became regent for some time and later, and was the foundress of many monasteries of monks and nuns.

Patrick Duffy reminds us what is known about her. 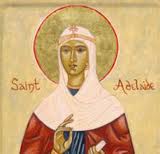 The daughter of Rudulph II of Upper Burgundy, Adelaide was married at the age of sixteen to Lothair, who was then king of Italy. A daughter, Emma, was born of this marriage. Lothair was probably poisoned by his successor to the throne, Berengar. As part of Berengar’s attempt to keep his grip on power, he ordered Adelaide to marry his son; she refused, and he imprisoned her in a castle. But soon after the German king, Otto the Great, defeated Berengar, and freed Adelaide and proposed marriage, which she accepted. 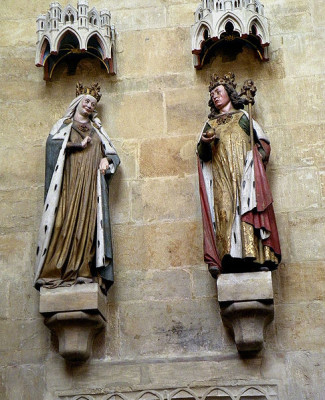 Second marriage to King Otto the Great
On Christmas Day 951 she married Otto at Pavia. The marriage consolidated his authority in northern Italy, and in 962 they were crowned emperor and empress by Pope John XII in Rome. Otto died in 973 and for twenty years Adelaide’s life was a turmoil of family and political troubles. Her daughter-in-law, the Byzantine princess Theophano turned her son Otto II against her. Adelaide had to leave the court and live for a time with her brother in Burgundy. A reconciliation was effected, and in 983 just before he died Otto appointed her his viceroy in Italy.

Struggles with Theophano, her daughter-in-law
Otto II died the same year, and the new emperor, her grandson Otto III, still a minor, was entrusted to the joint regency of his mother and grandmother. Theophano was able once again to oust Adelaide from power and the court. When Theophano died in 991 the regency reverted to Adelaide alone. 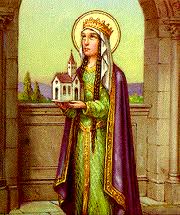 Helped by St Willigis
The bishop of Mainz, St. Willigis, came to her aid. After Otto came of age in 995, Adelaide was able to devote herself to works of generosity to the poor, to help in evangelising the Slavs and in founding and restoring monasteries and convents. She was especially friendly with the monastery of Cluny, then the centre of a movement for reform and with its abbots St. Majolus and St. Odilo. The latter wrote a memoir of her, calling her ‘a marvel of beauty and goodness’.

Retirement
When Otto III was old enough, Adelaide retired to the convent of Seltz near Cologne, a house she had built. She never became a nun, but she spent the rest of her days there in prayer. Her feast is kept especially in many German dioceses.