Summary of Ss Marcellinus and Peter, Martyrs who died in 304, beheaded at Rome under the emperor Diocletian. Reputedly members of the Roman clergy, they are held in special honour in Rome itself, as evident in the basilica built over their tombs and their mention in Eucharistic Prayer I (The Roman Canon)

Marcellinus, and Peter, are named together as martyrs in whose fellowship we ask to share in Eucharistic Prayer 1 (The Roman Canon). Peter was an exorcist and Marcellinus a priest and both were martyred in Rome under Diocletian (304).

It is said that it was on 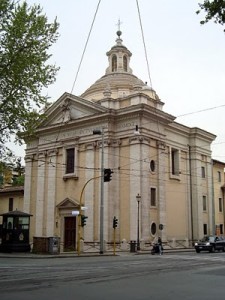 Via Labicana in Rome 9. that Marcellinus who was a priest and Peter who was an exorcist, resided. The fact that both saints were named together in Eucharistic Prayer 1 (The Roman Canon) indicates veneration in Rome very soon after their death.

Image right>: Station Church of SS Marcellinus and Peter The Station is in the basilica founded by St. Helen on the Via Labicana, where were buried the bodies of St. Marcellinus .

Ministries in troubled times
Peter, the exorcist, had been imprisoned by the judge Serenus for confessing the Christian faith. Artemius the prison-keeper had a daughter Paulina who was troubled by an evil spirit. Peter being a person entrusted by the Church with authority to cast out spirits was able to heal her. On seeing this, Artemius, his wife and neighbours were all converted  to Jesus Christ. Peter then brought them to Marcellinus the priest, who baptized them. 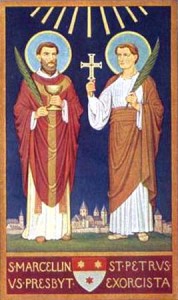 Answering with Christian boldness
When the judge Serenus heard of this, he summoned Peter and Marcellinus before him, rebuked and threatened them, demanding that they deny Christ. When they answered with Christian boldness, they were executed and their bodies abandoned in a place called the Black Wood so that other Christians would not be able to bury or venerate their bodies.

Burial and veneration
However, two Christian ladies, Lucilla and Firmina, came to know of this; they took the bodies and buried them with honour in a crypt near St Tiburtius, who was martyred some years earlier. The emperor Constantine is said to have built a church in their honour on the place and later had his mother St Helena buried there. The place where their bodies were found was afterwards called the White Wood.

Translation of their relics to Germany
In the early ninth century, Eginhard, secretary to and biographer of Charlemagne, became a monk in his later life. In 827 he asked Pope Gregory IV to send him some relics of martyrs to enrich the monasteries which he had founded or repaired. The Pope sent him the bodies of Saints Marcellinus and Peter. Eginhard located these relics at Seligenstadt near Frankfurt, where, in 829, he built a church and monastery in their honour.

In art
Both Marcellinus and Peter are depicted together, in ministerial garments, and bearing palms. In the early 17th century, the archaeologist Antonio Bosio (called the “Columbus of the Catacombs”) claimed in his book Roma Sotterranea that an ancient fragment he found represents Peter, Marcellinus, and Paulina standing together.

Cardinal priest of church
The Slovenian-born archbishop of Toronto, Cardinal Aloysius Matthew Ambrozic, is the present cardinal priest of the Church of Saints Marcellinus and Peter in Rome.