Summary: Seven Founders of the Order of Servites, Religious. In 1233 these prominent businessmen from Florence (Italy) withdrew to a life of solitude, prayer, and penance. They developed into an order of mendicant friars (Servants of Mary). Noted for their radical response to the demands of the gospel. 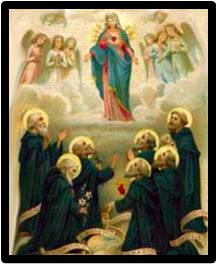 The Servite Order – and Servite Sisters (both OSM) as well as the “Mantellate” – owe their origin to a movement begun in 13th century Florence by seven wealthy merchants. All three groups have a devotion to the Seven Dolours or Sorrows of the Blessed Virgin Mary.

Patrick Duffy tells the story of their founders and some other saints associated with them.

Seven wealthy young merchants
In 1233 seven wealthy young merchants of the city of Florence, disenchanted with the worldly life of the city, wanted to live a more radical Christian life. They came together to found a religious society in honor of Mary, the Mother of God and at first were first known as Laudesi, “Praisers”. Later they went to Monte Senario outside the city where they built a hermitage and a church and began to devote themselves to a life together of prayer, penance and poverty.

sometime between the years 1240 and 1247 they were approved by the bishop of Florence as a religious Order under the rule of St Augustine. Their first leader was Bonfilius Monaldi. The other six were John Bonaiuncta, Manettus dell’Antella, Amadeus degli Amidei, Hugh Uguccione, Sosthenes Sostegno and Alexis Falconieri. They came to be known as the “Friar Servants or Servites of Mary” and made other foundations at Carfaggio outside Florence, Siena, Pistoia, Arezzo and Lucca but their most famous church is the Annunziata in Florence founded in 1250, and still today in their hands.

Spread
By 1260 the order was divided into two provinces, Tuscany and Umbria, with Manettus directing that of Tuscany and Sosthenes that of Umbria. Within five years two more provinces were added, Romagna and Lombardy. For a while around the time of the Second Council of Lyons 1274 the order was suppressed, but eventually in 1304 Pope Benedict IX gave it definitive approval. Six of its members were ordained priests. Alexis Falconieri remained a lay brother; he outlived all the others and was the only one alive when the order received papal approval. He died in 1310.

Other Servite saints
Three other saints of this order are worthy of mention: The first is St. Philip Benizi (1233-85) who had doctorates in medicine and philosophy before he joined the order and was was elected general in 1267. He codified the rules and constitutions, defended the order when it was under threat of suppression and sent the first Servite missionaries to the land of the Tartars. In 1279 at the request of Pope Nicholas III, he was also successful in bringing peace between the Guelphs and the Ghibellines.

The second is St Peregrine Laziosi (1265-1345). Born in Forli, he was an active supporter of the Ghibelline (anti-papal) party when Philip Benizi visited the city. He heckled and struck Philip, who literally turned the other cheek. This caused Peregrine to repent and join the Servites at Siena in 1292. He returned to Forli where he founded a new friary and devoted himself to working for the sick and the poor. His humility and patience were so great that he was called by his people a second Job. He also imposed a penance on himself of standing when it was not necessary to sit. This led to his contracting varicose veins which turned cancerous and were so bad that a doctor was about to amputate his leg. The night before the surgery Peregrine prayed before the image of the crucified Christ and when he awoke next morning he was completely healed. He died in 1345 aged 80 and his incorrupt body rests in the Servite Church in Forli. His feast day is 4th May.

A third saint associated with the Servites is St Juliana Falconieri (1270-1341), the niece of Alexis mentioned above. She founded a female branch of the Servites called the Mantallate. c/f/ 16th June.