May 3 – Ss Philip and James: apostles

Summary: Ss Philip and James Apostles.
Philip, from Bethsaida in Galilee, became a disciple of Jesus and one of the twelve. Recorded in the Fourth Gospel as recognising in Jesus the one foretold by Moses and the prophets (John 1:45) and as introducing Gentiles to the Lord (John 12:20-22). According to Acts 8:5, he was the first to preach the gospel to non-Jews.
James, son of Alphaeus, was also one of the twelve called by Jesus (Mark 3:18ff). Known as James the Less. Venerated traditionally as the author of the letter of James and as leader of the Church in Jerusalem, where he died in the year 62. 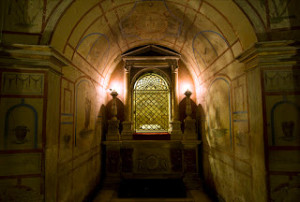 Patrick Duffy tells what we know about them from the New Testament.

Philip
Philip was from Bethsaida. It is he who brought Nathanael to Jesus (Jn 1:43). He has a Greek name and brought some Greeks to introduce them to Jesus (Jn 12:21-22). After Jesus’s last supper discourse, Philip says to Jesus, “Show us the Father and we will be satisfied.” Jesus, says, “Philip, have I been with you all this time and you still do not know me.” Perhaps with his Greek name, Philip is being presented as a typical rationalist. At any rate his faith would have been confirmed after Pentecost with that of the other apostles .

James
James sometimes called James the Less, possibly meaning “the small” (possibly from Mk 15:40) and also called the “son of Alphaeus” (Mt 10:1-4) and “the brother of the Lord”. He emerged as the ruler of the Church in Jerusalem after the Ascension and played a central role in the Council of Jerusalem. He was prominent in backing the decision not to impose Jewish customs on Gentile converts (Ac 15:13-21) and in commissioning Paul as an apostle to the Gentiles.

Jerusalem and the poor
James asked that wherever Paul went, he should remember the poor, and Paul organised a collection for the Church in Jerusalem (Rom 15:26-28, Gal 2:10, 2Cor 8:9 and Acts 24:17). In recent years papal documents have returned to this theme in talking about solidarity with and a preferential option for the poor (especially in the thought of John Paul II).

The Letter of James
The poor of the Christian communities are central also to the Letter that is entitled “of James”, but rather than being an indication of actual authorship, this is more likely an example of what is called “pseudepigraphy”, that is, the attribution of a writing to an author to claim his spiritual authority in order to approve its contents.