Summary of Ss Peter and Paul, Apostles: They died as martyrs at Rome under Nero, between 64-67. This pre-eminent feast day of the city of Rome has been observed on this date since the mid-third century. It commemorates the martyrdoms of Peter “the chief of the apostles” and Paul “the apostle to the Gentiles.” Noted for their faith, their courage, and their leadership during the difficult days of the birth of the Church. 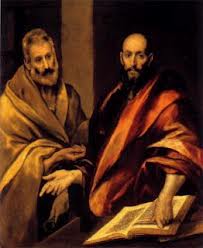 Today is the Solemnity of Saints Peter and Paul, twin founders of the Church in Rome. It is the day traditionally considered in pagan Rome to be its foundation day by Romulus. Although Paul had occasion to stand up to Peter because he would not eat with Gentiles – ‘I opposed him to his face, since he was manifestly in the wrong’ (Gal 2:11) – they are both jointly honoured on this feast. Today  is a day when the Pope confers the pallium on all the archbishops whom he has appointed in the previous year. The conversion of St Paul is celebrated on 25th January.

Here Patrick Duffy looks at what the New Testament tells us about Ss Peter and Paul.

A providential irony in Jesus’s choice of leader?
Simon was a bit of a bungler. Is there then an irony that is providential in Jesus’ choice of him as the leader of the campaign and of the community he put together to bring his salvation to the world. Simon’s mission is implied in the new name that Jesus gave him, Cephas or Peter, meaning Rock.

Impulsive and enthusiastic
In character, Peter is impulsive and enthusiastic – wanting to make three tents at the transfiguration on the mountain (Mt 17:4), attempting to walk on the waters and then has to be rescued by Jesus when he begins to sink (Mt 14:29-31). He denied Jesus three times, as Jesus had foretold he would (Mt 26:69-75).

Reinstated and mission
Jesus, however, takes special care to reinstate Peter as leader after the resurrection, asking three times “Do you love me?” and telling him, “Feed my sheep” (Jn 21:15-17).

The mysterious and providential character of Peter’s (and perhaps everybody’s) life comes out in the words Jesus then spoke according to John’s gospel:

I tell you most solemnly,
when you were young
you put on your own belt
and walked where you liked;
but when you grow old,
you will stretch out your hands
and somebody else will put a belt round you
and take you where you would rather not go (Jn 21:18).

Pentecost, imprisonment and escape
At Pentecost Peter surprised the people in Jerusalem with the power of the words he spoke about Jesus’s resurrection (Acts 2:40-41). Later he was imprisoned by Herod Agrippa, but had a miraculous escape (Acts 12:1-11).

Opposed by Paul
At Antioch, however, Peter gave into racial prejudice, declining to eat with the pagans, but Paul boldly corrected him. He tells us: ‘I opposed him to his face, since he was manifestly in the wrong’ (Gal 2:11).

Death and memory
Tradition has it that Peter came to Rome and was martyred under Nero around 64 AD. The emperor Constantine built a basilica to house his tomb. The present (16th century) basilica is now on that same site. Twentieth century excavations discovered the tomb of Peter, though it is impossible to say the bones are his. 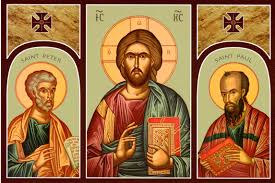 A Petrine ministry
Today in ecumenical circles there is a growing sense that the seminal text of Matt 16:13-19 where Jesus gives Peter authority to bind and loose can and should be interpreted in the sense of a Petrine ministry of leadership and stability in the Church. Peter is the chief steward in the palace of the kingdom with a role of rescuing from death’s dominion. If the Catholic Church could find a less triumphalistic and more humble word than ‘infallibility‘ as well a more collegial way of exercising its Petrine ministry, would it then find a more universal acceptance?