Ss Fabian and Sebastian, Martyrs.
Fabian, bishop of Rome, died as one of the first victims of the persecution under the emperor Decius in 250. In spite of being “a layman and a stranger” (Eusebius) became bishop of Rome in 236. Reorganised the Church in Rome. Called by his contemporary, Saint Cyprian, “a man incomparable in the holiness of his life and the glory of his witness.”
Sebastian died perhaps in the late third century. Nothing of his life is known for certain. Tradition says he was a soldier who was martyred after sustaining other Christians in their trials. Venerated in Rome since the fourth century.

They are honoured together since their names are linked together in the Calendar of Filocalus of 354, which gives the commemoration dates of past popes and martyrs. They are also named together as companions in the Litany of the Saints.
Patrick Duffy tells their story.

Fabian – from layman to pope
Fabian was a layman who became pope in 236, chosen, according to Eusebius, because a dove landed on his head when the community gathered for the election. He was an excellent administrator. He divided Rome into seven areas each served by a deacon. He organised building works in the cemeteries (Catacombs) and brought back the bodies of Saints Pontian and Hippolytus from Sardinia. His fourteen years as pope seem to have been mostly a period of peace, but when the persecution of Decius took place he was one of its first victims. His epitaph in the catacomb of St Callistus reads simply: “Fabian, bishop, martyr.” 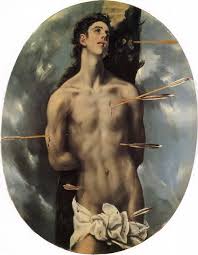 Sebastian was probably a native of Milan, born of Christian parents. He was drafted into the army and became the captain of the guard of Maximinian at Rome. Because of this he was able to help some Christians arrested during the persecution of Diocletian. But on finding this out, the Emperor Diocletian ordered him to be shot with arrows.

Thrown into the sewer 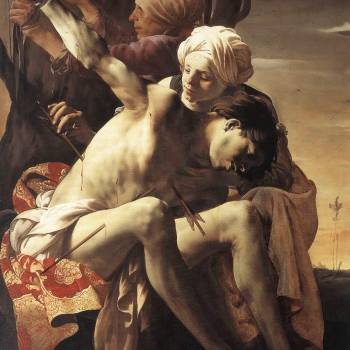 A legend tells how a Christian widow Irene found him still breathing, carried him to her home and nursed him back to health. He then went to the Emperor to confront him for the cruelty of his persecution. The enraged emperor had him beaten to death and his body thrown in the Cloaca Maxima, Rome’s main sewer.

The Christians recovered his body, washed it and wrapped it in a shroud and buried it outside outside the walls along the Appian Way in the vaults now known as the catacombs of St Sebastian.

Sebastian a theme of artists
The figure of St Sebastian pierced by arrows is one of the most recognisable images in art and has been the theme of many artists both of the renaissance and the modern era.