Summary: St Peter Claver SJ, a Catalan Jesuit missionary, who worked in Colombia, South America. At the height of the slave trade, he befriended and baptized some 300,000 African slaves over a 40-year period. He died on 8th September 1654. 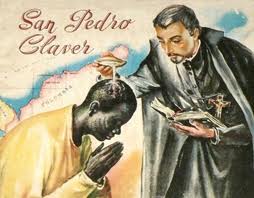 Peter called himself Aethioporum servus (slave of the Africans), he dedicated himself completely to their welfare. lave of the Negroes for all time; the Spanish Council of Tarragona in 1727 named him Apostle of the West Indies; and Father James Brodrick, the Jesuit historian, described him as ‘a fusion in one man of the Curé d’Ars, St Francis Xavier and Fr St Damian de Veuster’.

A house in Verdu
A plaque in a small room, now a chapel, in a house in the Catalan village of Verdu, about 50 miles from Barcelona, reads: ‘Here St Peter Claver, Apostle of the Negroes, was born in 1580’.  He was the youngest of three boys and a girl, whose father had a small farm nearby. When he was thirteen his mother and one of his brothers died within a few days. Soon afterwards his father married again and when his second wife died he married a third time. At sixteen Peter left home for good, going first to Barcelona to study for three years.

In 1602 he joined the Jesuits at Tarragona and three years later he was sent to study philosophy at a Jesuit college in Palma on the island of Majorca. Here he met the man who had the greatest influence on his life, Brother Alphonsus Rodriguez, who was then 80 while Peter was only 25. Alphonsus became his best friend and spiritual director or ‘my saintly master‘, as he called him. It was the old brother who encouraged the young student to go as a missionary to South America. 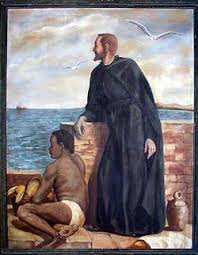 From Palma Peter Claver went back to Barcelona to study theology for two years. Then in 1610 he was among a group of Jesuits who sailed in a 300-ton galleon on a five month voyage to the West Indies. After arriving at Cartagena, on the Caribbean coast of what is now Colombia, Claver was sent to Bogotà, the capital. He was told to finish his theology studies here, though he now wanted to be a brother. In 1616 he was ordained a priest at the age of 36 in Cartagena.

Because of its splendid harbour, Cartagena was then the centre of the lucrative slave trade in Spanish America. Here Claver met another Jesuit, Fr Alphonsus Sandoval, who also greatly influenced him. Sandoval had already spent 40 years helping the slaves and when he was transferred to another mission he urged Claver to continue his work in Cartagena.

For 400 years, starting in the 16th century, Britain and France especially, but also Holland, Spain and Portugal transported about 15 million Africans as slaves to work in the mines and plantations of their American colonies. From 1680 to 1786 Britain alone shipped 2,130,000 African slaves to America. This vile trade was eventually abolished by France in 1818, by Spain in 1820 and by Britain in 1833.

‘About 400 Negroes, men and women, arrive in each small sailing ship,’ Father Sandoval reported.  ‘Usually a third of them die during the two month voyage from Africa.  They come with rings around their necks and their feet joined by fetters in pairs, so that they are chained from head to feet. No Spaniard stays long down in the dark hold of the ships, where the Negroes are imprisoned, without the risk of serious illness from the stench, overcrowding and misery of the place and where all kind of diseases soon spread. Once a day they are fed a platter of flour or raw millet and a jug of water. They get plenty of beatings and whippings. With this treatment they arrive like skeletons; they are taken from the ships naked and placed in a great yard. There come endless crowds of people, some to buy slaves, others from curiosity and a few from compassion.’

Claver organised his work thoroughly. With Br Nicholas Gonzalez, his assistant for 22 years and first biographer, he had a team of nine Negro interpreters, who spoke various African languages; Claver learned Congolese. Whenever a slave ship arrived he went to the port with medicines, food and drink. He went down into the hell below the decks where no other white man would venture. He washed and dressed the slaves’ horrible wounds; he fed them with food he had begged in the city; he baptized the dying and comforted the weary, who had suffered beatings and were homesick.

When the slaves came ashore he carried the sick and wounded in his arms to a hospital or camp, 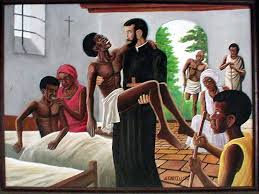 where he gave them clothes and more medicine and food. He used his own cloak as a veil to hide their leprous wounds, as a pillow for the sick, as a pall for those who died. It soon became as famous as its owner, for its very touch often cured the sick and, after his death, men fought to tear pieces from it as relics.

Only after the slaves were packed into yards to await their sale and where conditions were often worse than on board the ships, it was only then that Claver’s real work began. Here he patiently instructed them, partly by means of pictures, and baptized them by the thousand. He did all this not because he liked doing it, but for the love of God. But he did much more. He travelled from village to village across mountains and swamps to visit the slaves, giving them religious instruction every year. In Cartagena he regularly visited the prisons and prisoners about to be executed. He brought all the slaves of the city and surroundings to the Jesuit church, where he tolerated no segregation. In fact he always gave precedence to the slaves, who were admitted to confession first. ‘My confessional is too narrow for hooped petticoats: he told the Spanish ladies who sought him and complained of the smell of the African slaves in the church. On his less busy days he went to the wealthier area of Cartagena to beg for food and clothes. 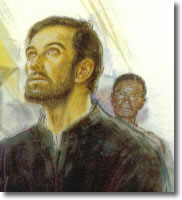 Peter Claver was of medium height, with a long thin face, an aquiline nose, large eyes and mouth, a dark complexion and a beard flecked with grey. His expression was usually sad and his head bent down. He wore an old threadbare cassock and carried a staff surmounted by a cross. ‘He dressed like a beggar, wearing old clothes rejected by others,’ wrote his biographer Father Andrade SJ. ‘His nights consisted of five hours of prayer and three hours of sleep. He meditated regularly on Christ’s Passion and he practised extreme mortifications. His only hobby was that he loved music.’

Routine reports about him sent to Rome by his Jesuit superiors read (dated 1616): ‘Mental powers, less than mediocre. Judgment, mediocre. Prudence, lacking: And (dated 1651): Advance in spiritual matters, excellent: One superior described him as ‘a Catalan, pigheaded and difficult’. 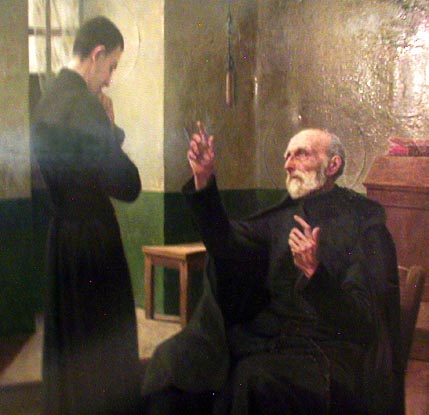 Father Valtierra SJ, his best biographer, wrote: ‘He rarely smiled. The dreadful human wretchedness which he witnessed, the cruelty of the slave-traders, the desolation of the hospitals – all this, added to his own strained physical powers, his lack of sleep and his penances, brought about the general sadness which was the background to his life. Sadness in him was the fruit of an immense love for a God he saw rejected.’ He had three intimate Jesuit friends: Brother (now St) Alphonsus, Father Sandoval and Brother Nicholas.

Nine Jesuits died from the plague which struck Cartagena in 1650. Claver never fully recovered from it and was paralysed and confined to bed for his last four years. Ironically, an African, who was assigned to care for him during this time, treated him horribly, though Claver never complained. When news of his death, at the age of 74 on 8 September 1654, reached the city, such big crowds of all kinds of people, many seeking relics, came to the church that soldiers had to be called on to protect his body.

The Jesuits reckoned that in 40 years Peter Claver baptized 300,000 African slaves, a record unheard of in Church history. When he and his old friend, Br Alphonsus were canonised on the same day in 1888, Pope Leo XIII said, ‘No life, except the life of Christ, has so moved me as that of St Peter Claver.

This article first appeared in The Word (September 2004), a Divine Word Missionary Publication.