Summary: Ss Cyprian & Cornelius, two martyrs who are mentioned together in the Roman Canon (First Eucharistic Prayer) indicating they had already attained a position of honour in fourth century Rome. The disputes that occurred during their time helped established principles about the unity of the Church, the practice of penance and the validity of the sacraments. 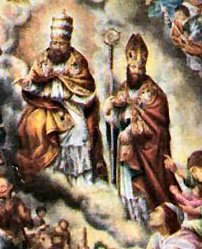 In a year 250 AD there was no pope, because of the Decian persecution. When it became possible to hold an election, Cornelius (image left) was the leading contender. However, a counter candidate emerged called Novatian who was strongly opposed to forgiving the Church members who had apostasised in the persecution allowing them back into the Church. Cornelius (image left), however, was for allowing them back and his candidacy was supported by a letter from Cyprian, bishop of Carthage. 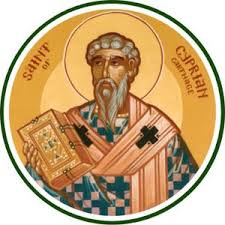 A middle position
Cyprian was born in that city about 210 AD. He trained and practised as a lawyer before his conversion to Christianity in 245. Within two years, he was elected bishop and shortly after he went into hiding because of the Decian persecution. For this he was criticised, but he did manage to continue administering his diocese through letters. A dispute about those who had lapsed during the persecution: some said they should be allowed to come back without any demands being made on them. Cyprian opposed this and insisted they could be re-admitted – provided, and after they had completed a period of penance. This middle position was supported by the newly elected Pope Cornelius. Cornelius was sent into exile by the emperor Gallus and he died at Civitavecchia in 253.

The Baptism of heretics
Another sacramental issue arose in 255 and this time Cyprian held a more rigorist position against that of Pope Stephen. The question was whether baptism according to the accepted form was valid if it was administered by a heretic. The new pope Stephen held that provided the accepted form was used – in the name of Christ or in the name of the Trinity – it was valid. Cyprian held it wasn’t valid and insisted on re-baptism. He did allow that heretics who had been baptized in the Church, but had temporarily fallen away and wished to return in penitence, need not be re-baptized. Eventually the Church decided in favour of the position held by Pope Stephen.

Sacramental principles
Three principles of Church sacramental theology were established through the disputes that arose following the persecutions at this time. The first was that the Church exercises the power to remit sin, even apostasy: the second was that unworthy members can be accepted back into the Church, provided they do penance; the third is the validity of baptism by heretics. 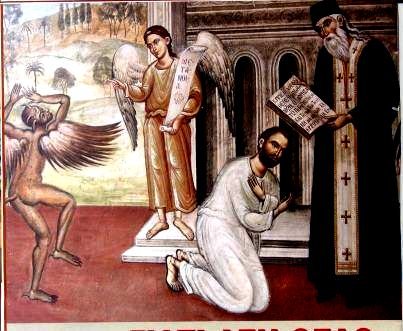 Cyprian was imprisoned under the persecution of Valerian in 257 and was exiled for refusing to participate in worshipping the Roman gods. He was put to death on 14th September 258. Since much of his writing helped to clarify issues about the sacraments, Church unity and the role of the bishop, St Cyprian figures and is quoted quite a lot in Vatican II’s Constitution on the Church Lumen Gentium.