From Toul in Alsace 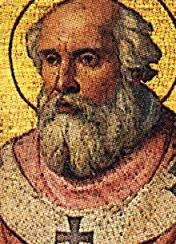 Bruno was born in 1002 at Toul on the River Moselle in Alsace. He became a deacon of the local diocese and he was given command of troops provided by the bishop to put down a Lombard rebellion, which he accomplished with success. While he was away, the bishop died and Bruno was chosen as his successor. He ruled the diocese for twenty years encouraging reform, discouraging clerical marriage, simony and nepotism.

Chosen as pope
That he was a distant relative of the emperor Henry III was a factor in the choice of Bruno by an assembly at Worms to succeed Pope Damasus II when he died in 1048. But Bruno insisted on going to Rome as a pilgrim and was acclaimed by the Roman clergy and people. His choice of the name Leo was probably meant to evoke the memory of Pope St Leo the Great (440-461). 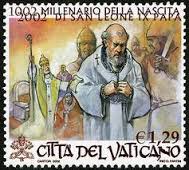 Travels and reform
Once acclaimed, Leo determined to take the papacy out beyond Rome through Italy, Germany and France. He held reforming synods at Pavia, Cologne, Aachen, Mainz and Reims working with and through the kings to do away with simony and clerical marriage. At Reims he made a purge of bishops who had gained their sees by simony. Those who confessed were restored; others were excommunicated or deposed. He also enforced orthodox doctrine condemning Berengarius of Tours (999-1088) for heretical teaching on the Eucharist.

Struggle with the Normans
However, he was less successful in dealing with the Normans who had invaded southern Italy. In fact although he had an army of German and Italian volunteers, he was defeated and captured by the Normans in June 1053 at Civitella and detained in captivity at Benevento during the winter of 1053-4.

Dispute with Patriarch Michael Cerularius of Constantinople
Because on his intervention in the south of Italy where the Byzantine East had many churches, Leo IX came under attack from Michael Cerularius, Patriarch of Constantinople, who accused Rome of heresy, especially because of its use of unleavened bread for the Eucharist. Leo replied, citing the Donation of Constantine claiming that the Pope had both an earthly and a heavenly authority. The Patriarch rejected the claims of papal primacy, and subsequently the Catholic Church was split in two in the Great East-West Schism of 1054 that lasts till today.

Leo’s death and influence
But Leo did not live to see the full outcome of that conflict. The campaign against the Normans took its toll on him. He returned to Rome a sick man and died piously on April 9, 1054. Many miraculous cures were attributed to him and he was acclaimed a saint. His military involvement was criticised by St Peter Damian, but he did set in train a programme to end simony, clerical marriage and lay investiture that was later brought forward by Pope St Gregory VII.