Summary : St Damasus I, Pope. Born in Rome about 305, the son of a priest; died there on this day in 384. He was elected bishop of Rome amid violent rivalry and was very active in opposing fourth century heresies.

Damasus was a strong proponent of the papal primacy of Rome in well known for sorting out controversies during the 4th century. He was also responsible for introducing Latin to replace Greek as the language of the liturgy at Rome, for building and restoring churches and for his care of the Roman catacombs.

After Christianity became the official religion of the Roman state and Latin was becoming the principal liturgical language, he is also remembered for promoting the cult of the Roman martyrs, inscribing their tombs with epitaphs in verse and commissioning St Jerome to prepare a new Latin translation of the Bible.

4th century controversies on doctrine and the papacy
Controversy had become quite common both with regard to the Arian heresy and with regard to the papacy itself by the time Damasus was named pope in 366. Having the emperors supporting the Church was not always an unmixed blessing, especially when they had their own opinions on doctrine and if there was a split in the imperial family.

Controversies during the pontificates of Julius (337-352) and Liberius (352-366)
Constantine died in 337. Of the two sons who succeeded him, Constans ruling in the West from Milan was an ardent Catholic, whereas Constantius in the East ruling from Constantinople was a declared Arian. A council was called in 343 at Sardica (modern Sofia in Bulgaria) to resolve the differences. Eighty bishops from each side attended, but when the Eastern delegation, who were mostly Arians, saw Athanasius, their great opponent from Alexandria, sitting with the Western bishops, they refused to take part and set up their own rival council, excommunicating Athanasius, Hosius of Cordoba, the leader of the Western delegation, who had presided also at Nicea and the pope himself, Pope Julius (337-352).

The Western delegation counteracted by restoring Athanasius to his bishopric at Alexandria, excommunicating his opponents and passing some canons saying that Rome had the final say in matters of dispute. 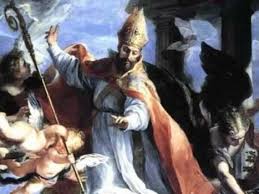 Saint Damasus domestic prayer: “turn back the hearts of fathers toward their sons”

Interference in the papacy of the emperor Constantius
When Constans was killed in 350, Constantius became master of the whole empire and strengthened the Arians during the papacy of Pope Liberius (352-366). He actually exiled Liberius in 355 and installed his archdeacon Felix as pope. Although some of Roman clergy supported Felix, the Roman people rebelled. Constantius wanted both to function jointly. But in the end Felix withdrew.

Damasus as pope
When Damasus, a deacon first under both Liberius and then under Felix, was elected, his election was contested and he was confronted by a rival pope, Ursinus. A violent struggle followed in which Damasus won out with the help of the Roman police.

Danesus supports orthodoxy but snubs the East
Soon supporters of Nicea in the East, like Basil of Caesarea, wrote to Damasus asking for his support against Arianism, but the manner in which he replied to them, addressing them not as “brothers”, as was the traditional formula, but as “sons”, contained an unveiled claim to superiority that did not escape notice and was deeply resented.

Supported by the emperor Theodosius
However, when the Spanish general, Theodosius, a devout Catholic who hated Arianism, became co-emperor with Gratian in 379, Damasus’s position was greatly strengthened. In February 380 Theodosius issued an edict requiring all the citizens of the empire to follow the Christian religion, “which Holy Peter delivered to the Romans… and as the Pontiff manifestly observes”. In 381 Theodosius called the Council of Constantinople which confirmed Nicea, effectively ending Arian opposition, and formulating the Creed as it is now recited by most Christians at their Sunday liturgy.

Damasus was the first pope to refer to Rome as “the apostolic see” and held a synod there in 382 to proclaim Rome’s primacy, but he resented the growing strength of Constantinople which was already claiming to be the New Rome.

Friendship with St Jerome
St Jerome (342-420) attended this synod in Rome and subsequently became Damasus’s secretary, advisor and friend. Damasus commissioned him to revise the Latin translations of the Bible. This work subsequently became known as the Vulgate. 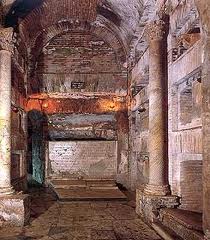 Other achievements
It was during Damasus’s pontificate that Latin replaced Greek as the language of the Mass. Damasus was also notable for his work in discovering the tombs of martyrs, for which he wrote many verse inscriptions. He was also an active builder and restorer of major churches in Rome and took responsibility for restoring the Roman catacombs.