Summary: St Celestine  was born and became a deacon at Rome around the time of Pope Innocent I (401-417). Later he himself became Pope 422-432 AD and continued the fight against the Pelagian heresy, which was now waning. He had the satisfaction of seeing it die away in Britain, where its founder came from. 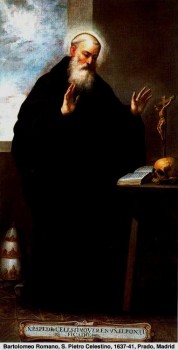 The tradition in Ireland is that Celestine was the pope who sent St Patrick to Ireland. He condemned the Nestorian heresy. And he is also credited as the pope who introduced the responsorial psalm into the Mass in Rome.

Influenced by St Ambrose at Milan and acquainted with St Augustine
A Campanian, Celestine is said to have lived for a while with St. Ambrose at Milan. He was certainly a deacon at Rome in the time of Pope Innocent I (401-417). In contrast to the stormy election of of his predecessor Pope Boniface (418-422), Celestine’s election seems to have been quiet and harmonious.

Against Pelagianism and Semi-Pelagianism
Once he became pope, St Celestine continued the fight against the Pelagian heresy, which was now waning. He had the satisfaction of seeing it die away in Britain, where its founder came from. When the heresy in the diluted form known as Semi-Pelagianism raised its head in Gaul, Celestine wrote against this new danger. A great friend of St. Augustine, he wrote a letter to the bishops of Gaul on the occasion of the mighty father’s death (430), praising him and forbidding all attacks on his memory.

Against Nestorianism
But the new heresy of Nestorianism raised its head in the East. Nestorius was a priest from Antioch who when he became patriarch of Constantinople began to teach that in Christ there are not only two natures, which is correct, but that there are also two persons, which is incorrect. A logical consequence was that Mary was not the Mother of God (theo-tokos) but only of the human person of Christ (christo-tokos). This aroused horror even in Constantinople itself, while St. Cyril, the patriarch of Alexandria, attacked the new doctrine most vigorously. Both Nestorius and Cyril were soon clamouring to the Pope for a decision. Celestine held a synod at Rome in 430 and condemned Nestorianism. Nestorius was to be deposed and excommunicated if he persisted in teaching false doctrine. Nestorius refused to submit, all the more because Cyril, who had been made the Pope’s agent in the matter, demanded more than Celestine had asked. A general council was called to meet at Ephesus in 431. The council condemned Nestorianism, to the great joy of the people.

St Patrick to Ireland?
Traditionally it was said that Pope Celestine a short time before his death personally commissioned St. Patrick to preach the gospel to the Irish. Perhaps it was Celestine who sent Palladius and it may be that Patrick came later. At any rate, St. Prosper of Aquitaine says in his Chronicle that Celestine saved the Roman island for the faith (De Paor, St Patrick’s World, 154).

Churches in Rome
Celestine restored, which had been destroyed by the Goths. He also caused some interesting pictures of the saints to be painted in the Church of St. Sylvester.

Introduced the responsorial psalm into the Liturgy of the Word at Rome
The church music historian Peter Jeffrey has pointed to the tradition in the Liber Pontificalis that it was Pope Celestine who introduced the responsorial psalm into the papal Mass at Rome, having experienced that practice as a young man at Milan when he was there while Ambrose was bishop. Perhaps it was also from Milan that Augustine could also have brought the same practice to Hippo in Africa.

St. Celestine I died on 26 July 432. He was buried in the cemetery of St. Priscilla in the Via Salaria, but his body, subsequently moved, now lies in the Basilica di Santa Prassede. In art, Saint Celestine is portrayed as a Pope with a dove, dragon, and flame, and is recognized by the Church as a saint.