Summary of St Philip Neri : Born in Florence (Italy) in 1515; died at Rome on this day in 1595. An outstanding proponent of Church reform after the Council of Trent. Worked among the young and the poor in Rome and founded the Congregation of the Oratory. Honoured as a spiritual director, for his pastoral initiatives, and for his humour, simplicity, and charity. 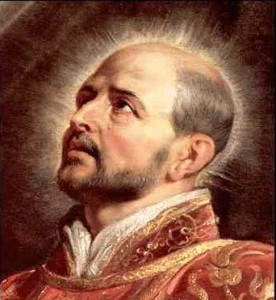 Called Pippo Buono or “good little Phil” from boyhood, Philip Neri had a very sociable disposition and he used this to lead people to God. He was the founder of a congregation called the Oratorians, which Cardinal Newman joined. The congregation has oratories in London and Birmingham, England.

Warm personality and infectious humour
‘Come stai? How are you?’ the young man asked. The passer-by stopped, his attention engaged. Then would begin a conversation which would lead to the usual question, ‘Well brother, when shall we begin to do good?’ And Philip lost no time in converting good intentions into action, bringing his ‘catch’ to visit the sick in the hospitals or to pray in one of the seven great churches of Rome.

Like a bee catching the fly with honey
Philip Neri would have been at home today in the work of Campus Crusade or a street outreach project on the streets of Dublin or London today. His method was direct but, like a bee catching the fly with honey, he attracted people to stop and chat by the warmth of his personality and by his infectious humour. But we are not talking about today and modern evangelism techniques, for Philip lived in the sixteenth century and at a time which was no less critical for the Church than it is at present.

His ‘conversion’
Philip was born in 1515 in Florence. Sadly, his mother died when he was young but a capable stepmother took her place, and Philip himself grew up with a happy disposition, earning the title Pippo Buono or ‘good little Phil’. After a solid education, he was sent to live with an uncle near the town of Monte Casino and it was hoped that he would get involved in his kinsman’s business. Soon after his arrival, he had a mystical experience – in later life he spoke of it as a ‘conversion’ – and he returned to Rome to live by providence. Except for the time he spent tutoring two young pupils, he spent much time in prayer in his bare attic. The years of prayer and solitude were followed then by a time of study in philosophy and theology. Now he felt ready to launch out on his mission to the people of Rome.

Religion at a low ebb
Religion was at a low ebb in the city, which had not recovered from the devastating invasion of the German and Spanish armies in 1527, a decade earlier. There were also grave abuses within the Church, and although they had long been recognized, too little was being done to cure them.

Luther’s protest of 1517 had led to the rise of Protestantism in Germany and beyond. The Sacred College of Cardinals, with a few notable exceptions, were worldly men who thought in terms of power and politics, rather than men dedicated to God and the Church. 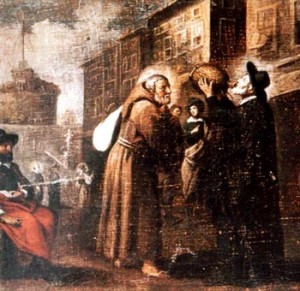 Indifference and luxury were rife among the clergy, many of whom allowed their churches to fall into disrepair, seldom said Mass, and completely neglected their flocks. Little wonder that the laity were lapsing into cynicism and disbelief!

To fill the people of Rome with new ardour, to re-evangelise the city, became Philip Neri’s life work. He travelled throughout the city seeking opportunities of entering into conversation with people and leading them to talk about the things that mattered.

Personal approach
Often Philip would engage people at a shop or in the street, indeed wherever he would find them will­ing to stop and chat. By his warm and personal approach he grad­ually prevailed upon many to give up their careless way of life. Then would come the question about ‘doing good’ and Philip leading the way to his new disciple.

For ten years Philip continued this work, but in 1548 he felt he needed to formalize his efforts and he founded a congregation called The Confraternity of the Most Holy Trinity whose primary object was to minister to the needs of the thousands of poor pilgrims who came to Rome especially in years of jubilee. He knew that one such Holy Year was only two years away.

The work extended to looking after the sick, and under his auspices the famous hospital of Santa Trinità was founded. In the Jubilee year of 1575 no less than 145,000 pilgrims were looked after by the hospital.

Confessor
Initially Philip shied away from the priesthood but his confessor convinced him that he should be ordained and in 1551 this took place. Then began a new ministry, that of confessor. Like St. John Vianney and Padre Pio in later centuries he would sit for hours hearing confessions, often telling penitents their sins before they confessed them!

By now others had come to join Philip and the locals called them the ‘oratorians’ because they rang a little bell to summon people to pray in their oratory. From small beginnings the congregation grew and Pope Gregory XIII (Ugo Boncompagni pope from 1572 to 1585) formally approved it in 1575.

Chiesa Nuova
By April 1577, work on the Chiesa Nuova – ‘new church’ – was almost finished. Philip moved to it some years later. Not only did his spiritual sons have free access to him, but his room was constantly crowded by others. Rich and poor climbed the steps that led to his refuge at the top of the house.

The Roman people loved and venerated Philip, and visitors even came from other countries to speak with him. In the words of one of his biographers, ‘He was all things to all men….  when he was called upon to be merry, he was so; if there was a demand upon his sympathy, he was equally ready’. 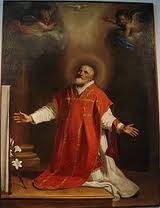 Two years before his death Philip retired from his office as superior in favour of his disciple, Caesar Baronius, later to be made Cardinal. He obtained permission from the Pope to celebrate Mass daily in a little Oratory adjoining his room.

A Corpus Christi death
On the Feast of Corpus Christi, 25 May 1595, Philip was in a radiantly happy mood, and his physician told him that he had not looked so well for ten years. He alone realized that his hour had come.

All day he heard confessions and saw visitors as usual. About midnight, he had a severe haemorrhage and the fathers in the house were called to his bedside. Unable to speak, Philip raised his hand, and in the act of benediction passed to his reward. He had reached the age of eighty and his work was done.

His body rests today in the New Church, Chiesa Nuova, which the Oratorians still serve. Six years later he was beatified; Pope Gregory XV canonized him in 1622.

This article first appeared in The Messenger (May 2007), a publication of the Irish Jesuits.