Summary: Our Lady of the Rosary. It entered the general calendar in the eighteenth century. It is a memorial of the Virgin Mary as honoured in the rosary, a form of prayer combining the salutation of the angel (Luke 1:28) with meditation on the saving mysteries of Christ.

Patrick Duffy gives the background to the feast 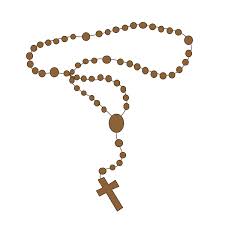 The Rosary of the Blessed Virgin Mary combines the recitation of the most profound of vocal prayers — the Our Father, the Hail Mary, the Glory Be, and the Apostles’ Creed – with meditation on twenty mysteri . es from the lives of Jesus and Mary.

Originally the rosary was the laity’s “psalter” with the Hail Marys replacing the 150 psalms.This commemoration was established in 1573 in thanksgiving for a Christian victory over the Ottoman forces at Lepanto.

The Rosary of the Blessed Virgin Mary
The word Rosary comes from the Latin word rosarium, meaning “rose garden“. Most commonly it refers to a religious exercise in which prayers are recited and counted on a string of beads or a knotted cord. The beads or cord itself, sometimes called a chaplet, is also called a rosary. Many religions have this practice. The most common use of this practice in Christianity is the Rosary of the Blessed Virgin Mary. The beads of the rosary or chaplet are arranged in five decades (sets of ten), each decade separated from the next by a space with a larger or more distinctive bead. The two ends of the chaplet are joined by a string holding a crucifix, one large bead, three smaller beads and another large bead.

How to pray it 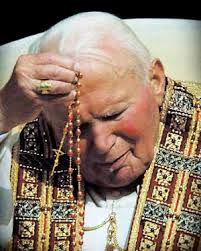 Traditionally, the Rosary fo the Blessed Virgin Mary required three rounds of the chaplet, reciting an Our Father, ten Hail Marys and a Gloria for each decade while meditating on the joyful, sorrowful and glorious mysteries of the lives of Jesus and Mary.
In 2002 Pope John Paul II added a fourth round with meditations on what he called the “luminous” mysteries, or mysteries of light –1. Jesus’s baptism, 2. the miracle at Cana, 3. he proclamation of the kingdom of God, 4. the transfiguration and 5. the institution of the Eucharist. 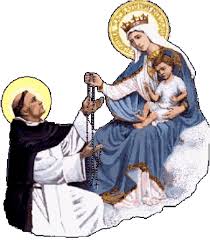 Origin and associations
Legend attributes the origin of the Rosary as a method of prayer to St Dominic. It was promoted as a kind of lay person’s Divine Office, the 150 Hail Marys replacing the 150 psalms. As a prayer of intercession to Our Lady the Rosary is associated with Christian victories in some significant battles – with the victory over the Albigensian heresy and their forces by Simon de Montfort at the battle of Muret 1213, and especially with the the naval victory won by the Christian fleet over the Turks at Lepanto, October 7, 1571. As a direct result of this victory Dominican Pope St Pius V inaugurated the feast.

Indulgences
The Dominican priest Alanus de Rupe formed a Confraternity of the Rosary at Douai around 1470 and from the fifteenth century onwards the Rosary may have become linked with indulgences. This is may be the reason why Protestants in general have not taken up the devotion. Recent Popes have avoided associating the Rosary with indulgences and Pope John Paul II warned against using it as a magic amulet.

Other chaplets
Eastern and Russian Orthodox Churches have a somewhat different chaplet with 100 beads. In Islam the rosary is an act of piety; it has 33 beads and requires three turns of the chaplet – each bead representing one of the 99 “most beautiful names of Allah” found in the Koran.

More information available at Today’s Saint of the day.