Our Lady of Lourdes

On 11th February 1858 Our Lady first appeared to 14-year-old Bernadette Soubirous. Later Bernadette, under pressure from her parish priest, asked her, “Who are you?” and heard from Our Lady’s own lips, “I am the Immaculate Conception”. 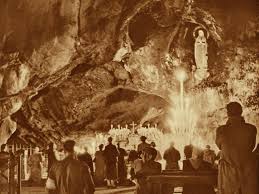 Patrick Duffy tells the story of the apparitions.

Family
Marie-Bernard Soubirous was born in 1844, the first child of poor parents, Francois and Louise, and from childhood she was called Bernadette. She had a younger sister, Toinette Marie, and three younger brothers. Bernadette tended animals for a family friend at nearby Bartres but returned to Lourdes in January 1858, worried that she had not yet received her First Communion. Only then did she begin to attend the free school run by the Sisters of Charity and Christian Instruction. 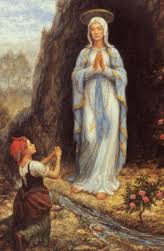 On 11th February Bernadette, now aged fourteen, was with her nine-year old sister Toinette Marie, and a twelve-year-old neighbour’s child Marie Abadie collecting firewood at a stream near Massabielle outside Lourdes. The two younger ones had taken off their shoes to wade across a stream and Bernadette got left behind. Suddenly she heard the noise of a rush of wind and saw a beautiful young woman in a niche in the rock, dressed in a white robe, with a blue girdle and a white veil on her head. She smiled silently and beckoned to Bernadette, who went down on her knees, took out her Rosary from her pocket and began to say her beads. The Lady also had a Rosary, but she allowed Bernadette to recite the decade and joined in only at the Glory be. When the Rosary ended, the Lady disappeared.

When the other girls came back, they saw Bernadette still kneeling. They thought she was trying to escape gathering timber and began to chide her. At first Bernadette said nothing, but on the way home she could not hold her secret. She asked them not to tell her mother, but they did, and her mother would not allow her to go back the next day.

Other apparitions
On the following Sunday Bernadette asked if she might go to the grotto again. Her father told her to take a bottle of holy water with her. She went with several little friends and knelt at the grotto. She saw the vision again, but the others saw nothing. News spread in the town. Her teacher and the mother superior at the convent forbade her to talk or even think about it.

The following Thursday, 18th February, she went with two women who thought the lady might be the spirit of a young friend of theirs who had died some months previously. This time the Lady smiled to Bernadette and spoke. She asked her to come every day for fifteen days. Bernadette promised she would, if she was allowed. Bernadette’s parents did not object. The following day her mother and aunt went with her, and on later visits great crowds of people gathered at Massabielle, hoping to see or hear something miraculous. The excitement increased. Bernadette was brought to the police-station for questioning but she didn’t change her story. 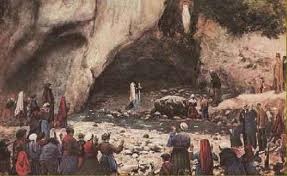 The following Sunday, a number of people gathered with Bernadette. This time the Lady told her: “You will pray to God for sinners”. On 26th February, while she was caught up in the vision, Our Lady told Bernadette to dig with her hands on the ground inside the grotto, to drink the water and wash her face. Bernadette did as she was told. A trickle of water appeared and when the lady told her, she drank it and bathed her face. Next day a steady stream was flowing from where there never had been a well or a river before. It has remained to this day and is the source of the water of all the baths at Lourdes. Those present regarded this as a miracle.

Build a chapel
On 2nd March Bernadette saw the Lady for the thirteenth time. This time the lady asked Bernadette to tell the priests to build a chapel and have a procession at the place. Bernadette went to the parish priest, Fr Dominique Peyramale. He reprimanded her and did not want to hear what she was saying.

“I am the Immaculate Conception”

Fr Dominique insisted that Bernadette ask the Lady to identify herself. On 25th March, the feast of the Annunciation, Bernadette went to the grotto at dawn and when the lady appeared she asked: “Would you kindly tell me who you are?” She repeated the question twice more and the Lady replied:
“I am the Immaculate Conception. I want a chapel here.”

When Bernadette reported this reply, it caused a fever of excitement. Four years previously Pope Pius IX had solemnly proclaimed in Rome that Our Lady was preserved free from all stain of original sin, the dogma of the Immaculate Conception. Bernadette could not easily have known or heard such words as at that time it was something that would only have been discussed by priests.

There were only two subsequent visions – on 7th April and 16th July. Many times afterwards, Bernadette was asked to repeat the story of the visions, but the accounts never varied in any significant detail.

Recognition
By now the local people, after seeing the miraculous new stream, frequently gathered at the place wanting to turn it into a sanctuary. The local authorities closed off the area. But news of the apparitions and miracles spread and soon the Church authorities were won over to believing Bernadette. It is said that the Empress Eugenie heard what was happening and may have influenced her husband Napoleon III to intervene with the local authorities. At any rate on 5th October the grotto was reopened.

Pilgrims throng to Lourdes
The following year thousands of pilgrims thronged to Lourdes. A statue of Our Lady was erected at the grotto in 1864. Fr Peyremale now became Bernadette’s advocate with the bishop of Pau and helped raise money for a basilica that was built nearby and consecrated in 1876. A second church at the base of the basilica was erected and consecrated in 1901. Landscaping and architecture turned the whole area into an impressive sanctuary against a background of great natural beauty.

Bernadette
Bernadette first stayed at the local convent of the Sisters of Charity and Christian Instruction. When she was twenty, she joined the order at the mother house at Nevers. Here, despite illness, she made her final vows in 1878. She died on 16th April 1879. She was canonised by Pope Pius in 1933. Her feast is on 16th April.

Papal visits and World Day of the Sick
Lourdes has since become an impressive place of pilgrimage and is visited by millions of Catholics every year. Many cures have been reported and 67 have been officially recognised. Pope John Paul II undertook three pilgrimages to Lourdes, the last one in 2004 shortly before his death to commemorate the 150th anniversary of the definition of the doctrine of the Immaculate Conception. Pope Benedict XVI visited Lourdes commemorating the 150th anniversary of the apparitions in September 2008.

In 1992 Pope John Paul II instituted World Day of the Sick to be celebrated each year on 11th February, the anniversary of the first apparition of Our Lady to Bernadette and the first was celebrated the following year in Lourdes itself. 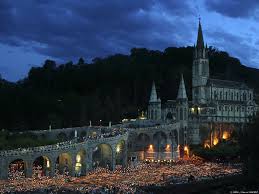