Summary:the feast of our Guardian Angels. This feast originated in Portugal early in the sixteenth century and has figured in the general calendar since the late seventeenth century. It is based on the scriptural  belief that God assigns everyone an angel to guard body and soul –  an expression of God’s personal care for each individual. A similar belief is also found in Jewish and other religious thought. The feast associates the human race with the eternal song of praise in heaven (Matthew 18:10). 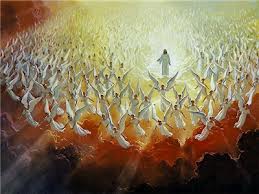 It is an interesting paradox that at the height of the secularisation of cultural life in the West, New Age ideology should begin to draw strongly from the traditional Christian teaching of Guardian Angels. In 1968 just after the  Death of God movement and the publication of Harvey Cox’s The Secular City, renowned sociologist, Peter Berger, wrote a book entitled A Rumour of Angels.

Patrick Duffy explains some of the background to this feast.

Angels in the Bible
Angels are mentioned in more than half of the books of the Bible and three angels are named archangels or highest angels in different writings – Michael,  (Dan 10:13, Jude 9 and Rev 12:7), Gabriel (Dan 8:16 and Luke 1:19 and 26) and Raphael in the Book of Tobit).

Messenger
The Greek word angellos means “messenger” and in the Bible angels act as messengers of God. For example, an angel appears to Zechariah in the temple foretelling the birth of John the Baptist (Lk 1:11-20), to Joseph and Mary foretelling the birth of Jesus (Mt1:20-25 and Lk 1:26-38) and to the women at Jesus’ tomb telling of his resurrection (Mt 28:2-7; Jn 20:11-13).

Role
One role of angels in the Bible seems to be to encourage and minister to the needs of God’s people – Raphael cures Tobit’s blindness and leads Tobias to a happy marriage (Tobit 3 and 6). Another role seems to be opposing the work of Satan and his demons – like Michael in Rev 12:7-9. Demythologising writers have interpreted this as either a literary genre, or as a symbolic/metaphorical way of speaking of God’s providential care. Either way it expresses faith in God’s providential care. 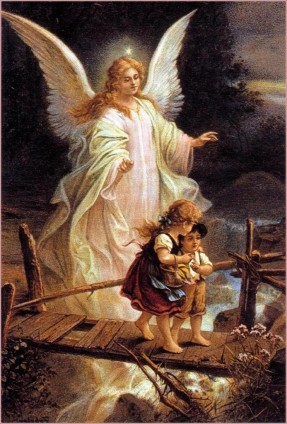 The belief in guardian angels is based on the protecting power of God as expressed in Psalm 90:10-12:

Upon you no evil shall fall,
no plague approach where you dwell.
for you has he commanded his angels,
to keep you in all your ways.
They shall bear you upon their hands
lest you strike your foot against a stone….

‘See that you never despise any of these little ones, for I tell you that their angels in heaven are continually in the presence of my father in heaven.’ 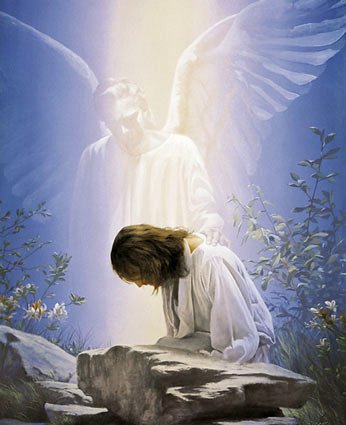 For each of us in the church of God, no matter how small, there is a good angel of the Lord who stands before the face of God to rule and move and govern, to correct our actions and intercede for us in our sufferings.

St Jerome, writing a century and a half later does not limit guardian angels to those in the church:

‘What a great dignity of souls, that each person has from birth, an angel assigned as guardian!’

Prayer
This traditional theology of “Guardian Angels” is admirably expressed in the prayer poem taught to us in childhood:

O angel of God, my guardian dear,
to whom God’s love commits us here!
Ever this day be at our side
to light and guard, to rule and guide.