Summary of Bl Pavel Gojdic, (pronunciation Goydich) a Byzantine Rite Catholic priest, became known to his people as ‘the man with a heart of gold’, but he was a thorn in the side of the Czech Communist regime of the 1940s and 50s. When the Communists made the Greek Catholic Church illegal, Pavel was arrested and imprisoned. He suffered mistreatment and humiliation which brought about his death in 1960. 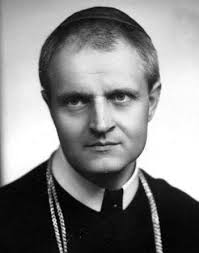 Pavel was born on 17th July 1888 near the city of Prešov, in eastern Slovakia, into the family of the Rusyn (or Ruthenian) Greek Catholic (Byzantine Rite) priest Stefan Gojdic; his mother was Anna Gerberyova. He was baptised Peter. He studied for the priesthood in Budapest and was ordained at Prešov in 1911. After his ordination he worked for a short period as assistant parish priest with his father and taught in the local seminary.

A monk, then a bishop
In 1922, desiring to live a humble and ascetic life, he joined the Order of Monks of St. Basil the Great at Mukacevo in south-west Ukraine, taking the religious name Pavel. But in 1926 he was made Apostolic Administrator of the eparchy of Prešov and a year later he was ordained bishop in the crypt of the Basilica of San Clemente in Rome, where there is a chapel to the Slav saints, Cyril and Methodius.

As bishop he promoted the spiritual life of clergy and faithful, insisting on the proper celebration of the liturgy and of church feasts. He erected new parishes of the Rusyn Greek Catholic rite in Prague, Bratislava, Levoca and elsewhere. In 1940 he was made the resident bishop in Prešov in 1940 and during the German occupation strongly defended the Church and the Rusyn culture. 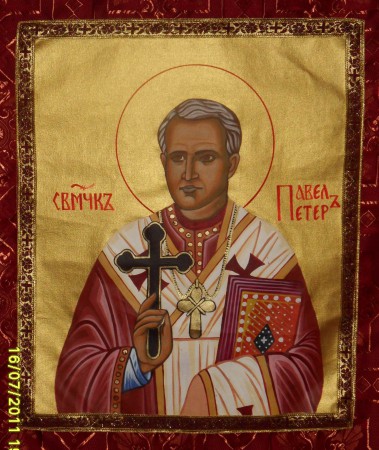 From 1948 onwards Bishop Gojdic resisted the enormous pressure from the Communists to bring the Greek Catholics into the Russian Orthodox Church. In 1950 he was arrested, and after a trial was sentenced to life imprisonment for treason. In prison he was put through physical and psychological punishments, but he used the time to pray and was able to celebrate the Eucharist in secret.

Following an amnesty in 1953, his sentence was commuted to 25 years. He was then 66 and his health was deteriorating. It was proposed to release him if he would agree to become Patriarch of the Orthodox Church in Czecho-Slovakia. He resisted  this tempting offer, saying that this would be a grave sin against God, a betrayal of the Pope, of his conscience and of his faithful. One consolation was a telegram he received from Pope Pius XII on his 70th birthday, assuring him of his prayers.

Death and posthumous honours
Before Bishop Gojdic died, when he was in the prison hospital of Leopoldov, a priest, Father Alojz Vrana, was transferred into the same room with him and the bishop was able to go to confession. He was buried without ceremony in a nameless tomb in the prison cemetery, with just his prison number 681.

When the political situation in Czecho-Slovakia eased in 1968, the state authorities allowed his remains to be exhumed and transferred to the crypt of Greek Catholic Cathedral of St. John the Baptist in Prešov and they are now venerated in a sarcophagus in the cathedral. 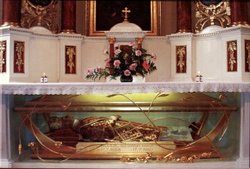 During his historic visit to Slovakia, Pope John Paul II while visiting Prešov, prayed at the tomb of this bishop-martyr in the chapel of the cathedral on 2 July 1995. He beatified him in 2001.

Yad Vashem honour
On 29 January 2008 the Yad Vashem Holocaust Memorial in Jerusalem accorded the title of “Righteous among the Nations” to Blessed Pavol Gojdic, for saving two Jews during the time of the Holocaust. The move to award this honorary title was initiated by the Rabbi Jossi Steiner of Kosice, Slovakia, and a Jewish woman saved by Bishop Gojdic. The honour has special significance as Jewish people had at times accused Catholics in Slovakia of actively assisting the Holocaust.