Last February, on the feast of St. Blaise, after giving the blessing for sore throats, a man said to me, ‘It is a pity we don’t have a patron for sore backs and arthritis.’ Then, I realised we do indeed have such a patron – St. Alphonsus de Liguori. For the last 30 years of his life, he was crippled with these pains. I decided to find out more about this aspect of his life. 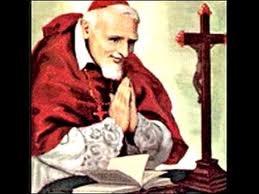 St. Alphonsus was born in Naples in 1696. He was a brilliant lawyer but became a priest and founded the Redemptorists. When he was 66 years old, he was made a bishop. His health had always been poor, but just after he became bishop, he got a sudden severe attack of arthritis and sciatica. He had high fever and unbearable pain. The remedies at that time were also painful: poultices and blistering.

His right leg became paralysed. For some time, he could not visit the people of his diocese and could not preach. He recovered on that occasion, and got back to his hectic pace of work. But the arthritis never left him. The worst was not the pain but the fact that he couldn’t sleep. He couldn’t find any position in which he was at ease. Yet his mind was as clear as ever. He dictated letters to a secretary. He wrote to all his penitents, as well as letters about diocesan and Redemptorist affairs. He continued writing books and getting them published. He never stopped working.

Gradually, he was able to walk again, first with a crutch and then with assistance. He started travelling by carriage. Of course, he had to be lifted in and out. That went on until he fell and could no longer get into the carriage. But still his work in the diocese and his writing continued.

Condition gets worse
However, Alphonsus’ arthritis became progressively worse. It spread from his hips and the pelvic region to his spine. It eventually affected the whole length of his spine, and developed into curvature of the spine. His whole body became deformed and bent to one side. It forced his head downward and forward until his chin was pressed into his chest. The pain was intense. He prayed ceaselessly, resigning himself to the will of God. 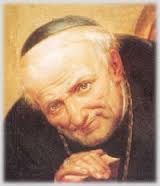 When the doctor came to him, he noticed an unpleasant odour. Alphonsus’ chin and beard had eaten into his chest, and the raw, gaping wound was infected. He had a high fever and the infection spread through his whole system. The slightest movement caused him agony, like the suffering of Job.

With medicine, the wound in his chest cleared up. But he would never stand erect again. His head remained bent and his spine twisted. Looked at from behind, he seemed to have no head. Indeed, he joked about his condition, calling himself “a headless man” and “a bag of twisted bones.” He must have been a pitiful sight. And still he could not sleep. 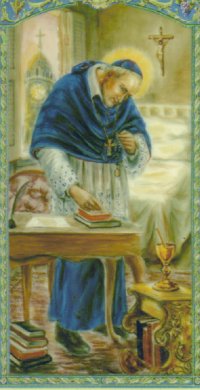 What he wanted most of all was to say Mass. But because his head was down on his chest, he could not receive the Precious Blood from the chalice. For over a year, he did not say Mass. They experimented with all kinds of straws, even a tube made of precious metal. But Alphonsus would not use them for Mass. Eventually, a local Augustinian made a suggestion.

At communion time, Alphonsus would recline in a chair and lean back as far as he could so that he could drink from the chalice. Even then it was only with considerable difficulty that he could say Mass. On many occasions he tried to resign from his bishopric, but the pope would not let him. Eventually, his resignation was accepted.

Return of scruples
In 1775, Alphonsus returned to Pagani, the mother house of the Redemptorists, where he spent the remaining 12 years of his life. Soon the terrible scruples he had overcome years earlier returned. He would constantly send for his confessor. Added to this mental suffering was his physical pain. He had to be lifted in and out of bed. He was put in a wheelchair, which he hated. Yet at least they could wheel him along the corridors and to the chapel. He spoke often of his approaching death.

However, before he died, he became peaceful and calm, and his terrible scruples disappeared. Finally, in 1787, the God whom he served so well called him home.

I am sure that many people with pains and aches can understand exactly the agony Alphonsus went through. And Alphonsus can understand their suffering too. Could you imagine a better patron for arthritics and for all who have trouble with their back or spine than this saint and doctor of the church? I suggest this blessing below.

Through the intercession of St Alphonsus Liguori, who suffered from curvature of the spine and from severe bone, muscular and joint pains, may God alleviate the pains of those who suffer from arthritis, back and spine trouble, rheumatism, sciatica, lumbago, and like problems.

May the blessing of God Almighty, Father, Son and Holy Spirit descend on you. Amen.

This article first appeared in Reality (November, 2002), a publication of the Irish Redemptorists.