A strong delegation of academics and business people from Ireland attended a recent conference on economy in Nairobi, Kenya.

Among the delegates at the 2015 International Economy of Communion (EoC) Congress, was Dr Lorna Gold, Head of Policy and Advocacy with Trócaire, who addressed the conference a number of times.

The EOC is a global project launched 24 years ago in Brazil to bring a ‘culture of communion’ to economy.

The project was born in the Focolare movement.

In her talk at the Nairobi conference, which attracted 300 business people from 41 countries and 5 continents, Dr Gold said that each culture proposes its own definition of wealth and poverty, including the culture of communion.

“If ‘wealth’ is taken as a shorthand for the aspiration for progress of individuals and nations, and poverty the lesser state they want to leave behind, communion offers a unique interpretative key,” she said. 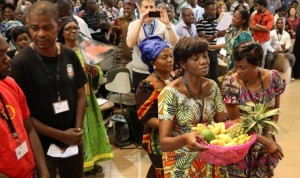 Despite owning little, in fact, those who live in communion have a great patrimony of wealth both in terms of material and non-tangible goods, she continued.

“It is a Gospel paradox which reveals an economic logic – spiritual detachment, if lived out of love, sparks a circulation of goods, talents, ideas, good will, which generates abundance.”

In the culture of communion, there was a “phenomenal capacity to generate shared wealth” she said.

Comparing this ‘communion’ to an “electrical network” with “transmitters sending out currents of generosity in every direction”, Dr Gold said these currents were capable of “generating a tsunami of generosity” with surprising, unexpected effects.

“It is the mysterious, yet verifiable dynamic of communion: providence.”

She continued, “Seen from this vantage point, poverty, with all its material deprivations, can be interpreted as total isolation, being totally outside communion: the anguish of dying of hunger in a world of plenty, believing nobody cares enough to help.”

Addressing poverty was about “bringing the person into communion”. People living in deprivation invariably described their experience as “exclusion” and a “sense of abandonment”.

“Our approach to addressing poverty, therefore, has to be centred on the premise of building fraternity as equals, enabling participation and empowerment to take root.” 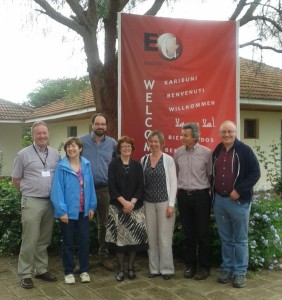 Speaking to CatholicIreland.net on her return from the conference, Dr Gold said that EOC institutions including businesses (of which there are about 1,000 worldwide) were the “creative means to bring people into this relationship of communion through creating work, technology transfers, profit sharing and so on.”

According to Dr Gold, the EOC has grown significantly in France, Spain, the USA, as well as in Africa with many young entrepreneurs choosing this philosophy for their businesses as a means of bringing integrity to their work.

“The EOC business people have a motto ‘love the other’s business as your own’. It means engaging in technology transfer with other EOC businesses, taking on EOC interns, underwriting others projects, co-creating new social enterprises to deal with poverty in local communities and beyond.”

She said it was significant that the 2015 international meeting took place in Africa.

“African traditional society has a strong sense of togetherness, communitarian spirit, which is called ‘Ubuntu’.”

The clash between the modern capitalist economy (with its underpinning of self-interest) and ‘Ubuntu’ was keenly felt with African philosophers and economists fearing that the current economic development path “will destroy the spirit of  ‘Ubuntu’, impoverishing many people in the process”.

“There is a strong desire to find an economic path which does not destroy ‘Ubuntu’ – and the EOC is a natural fit in many respects,” she added.