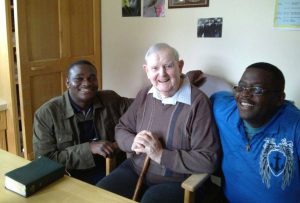 The Franciscans in Ireland have said the award bestowed on Fr Paschal Slevin posthumously on Monday by the government of Zimbabwe is “a wonderful sign” that the missionary’s “dedication to the cause of peace and justice for that country will not soon be forgotten”.

A special ceremony took place in the Zimbabwean capital, Harare, on Monday, attended by representatives of Fr Slevin’s family and the Franciscan Order.

Fr Slevin died in Dublin on 1 May this year aged 83. He had retired back to Ireland due to increasing bad health.

According to the Franciscans in Ireland, “his heart was always in Zimbabwe with the people he loved, and who loved him in return”.

The Zimbabwean government is led by the notorious dictator, President Robert Mugabe.

It bestowed its highest honour for foreigners, the Royal Order of Munhumutapa, on Fr Slevin in recognition of his contribution to the life of the majority population both under the former white colonial apartheid regime and after the gaining of independence.

“His life as a Catholic missionary highlights his basic humanitarian, rather than strictly political, contribution to the quality of life of the citizens of his adopted country,” the Franciscans stated.

His achievements include the building of primary and secondary schools at Mt St Mary’s Mission in Wedza. Many students were subsidised by a special Sponsorship Fund established by the Franciscans under Fr Paschal’s leadership.

This enabled them to further their education at third level, qualifying them to take up key positions of influence in the new nation.

As a stance against a form of apartheid, and in the face of opposition from the Rhodesian government, Fr Paschal appointed African headmasters to these local schools.

His concern for the local economy led Fr Slevin to construct a dam, build grain silage silos and distribute maize to the needy in times of drought and famine.

He also formed a farming co-op to help the people to help themselves. These included a co-operative of women who made school uniforms and other clothing, thereby supplementing their meagre income from farming.

A native of Ballinacargy, Co. Westmeath, Fr Slevin is just one of seven individuals to have received the award to date. Previous recipients include former Zambian President Kenneth Kaunda and the late Tanzanian President Julius Nyerere.

These previous recipients were honoured for political reasons such as ‘dedication to African Nationalism’, ‘revolutionary leadership’ and the ‘eradication of colonial domination’.

In their statement, the Franciscans explained Fr Paschal Slevin’s attitude to the liberation struggle in Zimbabwe as “a pragmatic one”.

They stated that “Though essentially sympathetic to the desire of the majority to rule themselves, he found himself caught between the laws laid down by the Rhodesian Regime and the demands of the liberation struggle. He knew that many of the students from his schools were absconding to join the combatants and frequently delayed reporting them till they were safely on their way. He facilitated staff from the hospital in Wedza to bring medical supplies to injured combatants after curfew, sometimes accompanying these Good Samaritans at no small danger to himself. Eventually he became such a thorn in the side of the regime that he was deported for colluding with the enemies of the State.

“Returning in triumph after the fall of the Smith Regime, Paschal devoted his all to serving the people in still challenging times under the leadership of Robert Mugabe.”

They added that the award is a recognition of the efforts of many priests and religious, native and foreign, during the time of nation building.

One little known aspect of Fr Slevin’s time in Zimbabwe was his friendship with the mystic John Bradburne.

John Bradburne was a lay member of the Order of St Francis, a poet and warden of the Mutemwa leper colony at Mutoko. He was killed by guerrillas on 5 September 1979 near Mutoko, Mashonaland in what was then South Rhodesia and is now Mashonaland East, Zimbabwe.

In July 2001, Fr Slevin presented a petition to Patrick Fani Chakaipa, Archbishop of Harare, for the possible cause of John Bradburne.

Fr Slevin commented of Bradburne, “I have no doubt that John died a martyr in his determination to serve his friends, the lepers. If his martyrdom is accepted, his cause for sainthood could go quite quickly.”

A service is held in Bradburne’s memory at Mutemwa every year, drawing as many as 25,000 people each time.