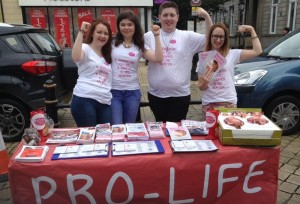 Yesterday the ‘roadshow’ was in Lurgan and Lisburn.  The young people are travelling across the six counties using public transport, carrying with them bags of leaflets, their table, banner and models of babies in the womb.  “The aim of having the model babies is to show the development of the unborn child in the womb,” Rachel McEvoy told CatholicIreland.

In each venue the group sets up a temporary base, distributes leaflets and invites the public to fill out petitions which will be sent to Storemont. They have two small pictures of aborted babies on display too.  “We want to show the horror of abortion,” said Ms McEvoy.  “A lot of people are not aware.  Abortion is illegal in Northern Ireland. We want to keep it like that and provide alternatives for women in crisis pregnancy situations.” 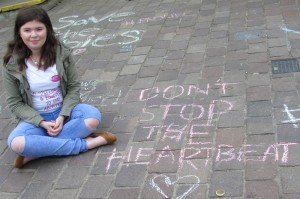 Before leaving a town the group writes chalk messages on the street pavements.

On Wednesday the group was in Enniskillen and Omagh.  In Lurgan yesterday, the group estimated that a hundred members of the public filled in petitions.  Ms McEvoy says they have been getting a positive reaction.

This is the first Youth4Life roadshow, although the young people hold a Street Outreach every Saturday in the Cornmarket area of Belfast from 2.00pm to 4.00pm.  “Without this vital educational outreach, I think the public would be indifferent to the existence of abortion,” said Ms McEvoy who is youth co-ordinator with Youth4Life.

The Roadshow is costing hundreds of pounds to run.  “There are a lot of generous people helping out with food and accomodation,” said Rachel McEvoy but they also appeal to the public to support their roadshow with donations which can be made online at www.preciouslife.com.

Youth4Life is the youth branch of the largest pro-life group in Northern Ireland, Precious Life. Bernadette Smyth founded the group in 1997 after viewing a picture of a baby killed by abortion. She was horrified and decided to do something about it. Since then the group has worked tirelessly to keep abortion out of the province. 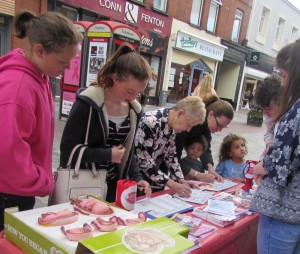 Precious Life is the only pro-life group actively working on the streets of Northern Ireland every day. Composed of people from all sections of the community, the group is non-denominational and non-party political.

“Since our formation, there has been a dramatic drop in the numbers of women travelling from Northern Ireland to England for abortion. We believe this is directly attributable to our activism,” says Bernadette Smyth. “By exposing the lies surrounding abortion; by educating the public with the truth about abortion; and by campaigning against abortion – we are saving babies, mothers, and indeed this country, from the silent holocaust that is brutally destroying 50 million lives worldwide every year.”

Youth4Life NI involves around 25 core members with other young people helping out with the Street Outreach and Roadshow.  They are always looking for more volunteers aged between 18 and 30.  Anyone interested can contact Rachael at [email protected]