Youth 2000 Christmas retreat is biggest yet 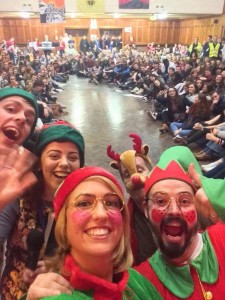 Six hundred and fifty young people were at the Youth 2000 annual retreat last weekend in Newbridge.

According to the National Mission Co-ordinator with the group this was the “biggest one yet” .

The event ran from Friday afternoon 18 December until Sunday 20 December, but by Thursday 17 December organisers had to close the retreat bookings as they could not cope with the numbers.

An estimated 150 young people were under eighteen.

“It is one of the few movements really reaching out to the under eighteens. We want to reach young people as early as possible and share this good news with them.”

The event was widely publicised through social media, posters in churches and flyers in takeaways and pubs but according to Ms Garrihy it personal invitations are most effective.

“At the summer festival last August at the Cistercian College, Roscrea we said to the young people ‘You’ve received something special, so invite other people.’ Lots of people brought friends to Newbridge. Word of mouth is most effective.”

The nucleus of the Youth 2000 movement are the regular prayer meetings at forty locations nationwide.

Generally they have a chaplain, but where this is not possible, the young people use an “online Gospel reflection” which a priest associated with the movement will have written. Afterwards they socialise over refreshments. 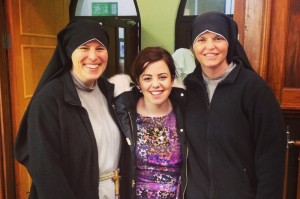 The movement also has local social outings like bowling or parties and a few national events where young Catholics from the whole island of Ireland come together.

Among the guest speakers were Fr Patrick Cahill from Mitchelstown and Fr Shane Sullivan from Tuam who gave talks on the Eucharist, Our Lady and Living the Christian Life.

Workshops during the weekend focused on topics like living chastity, faith questions and abortion.

Bishop of Kildare & Leighlin, Denis Nulty celebrated the Mass on Saturday afternoon and stayed on for the Healing and Reconciliation Service, hearing confessions late into the night.

“We want to let young people know they are not alone,” says Maura Garrihy. “It is okay to have questions. We are about the Church in Ireland and young people meeting Jesus. We are trying to equip and encourage them to be an active part of the life of their church.”

Maura said that sometimes young people are “not open to faith” because of misconceptions they have picked up through society and the media but when they come along “they meet joyful, normal young Catholics and they realise  that faith is not about rules, it is about relationships.”

Many young people carry with them the baggage of a “lot of hurts” , she said, but in Youth 2000 they come to a place where they are accepted as they are.

“Maybe they have misconceptions but they also have a desire for meaning, something more and that is where the movement makes the connection.”

Youth 2000 is a Catholic youth organisation that organises faith festivals, retreats, prayer groups and other events for young people aged 16-35 across the island of Ireland. For information see www.youth2000.ie.