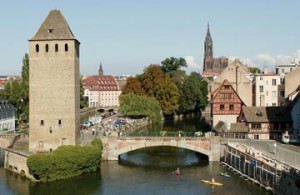 Up to 30,000 young Europeans are expected to attend this year’s ‘Pilgrimage of Trust’ hosted by Taizé in Strasbourg, which starts today 28 December.

There are also young people from the area where the event is being held in Alsace and the German region of Ortenau.

“Those who love Christ all across the earth form a large community of friendship. They have a contribution to make in healing the wounds of humanity: without wanting to impose themselves, they can promote a globalisation of solidarity which excludes no people and no single person,” Bro Alois, prior of Taizé, states in the ‘Four Proposals for 2014’, which all participants receive.

Several messages of support to the Taizé gathering have already arrived.

Pope Francis sent a message in which he stated: “Because it is taking place simultaneously in two countries, your meeting is a sign. Europe, which has gone through and is still going through difficult times, needs your commitment, your faith and your courage.”

He continued, “You are aware that the division among Christians is a formidable obstacle to the accomplishment of the mission entrusted to the Church and that “the credibility of the Christian proclamation would be much greater if Christians went beyond their divisions” (Exhortation Evangelii gaudium, n. 244).

The Pope shares with you the conviction that we can learn so much from each other, because the realities that unite us are many.”

Other messages have been received from the Secretary General of the Lutheran World Federation, Pastor Martin Junge, who stated: “by walking and talking, by praying and singing together in the coming days you journey together towards a new solidarity.”

The Secretary General of the United Nations, Ban Ki Moon said: “we have to globalise compassion and citizenship.”

The President of the European Council, Herman van Rompuy and various *Church leaders have also sent good wishes and several more messages are expected, in particular from the Orthodox Churches which will be published on the Taizé website.

Each morning participants will meet in more than two hundred host parishes on both sides of the Rhine, in France and in Germany, for a moment of prayer and sharing.

On the afternoons of 29 and 30 December, the meeting programme offers a choice of twenty themes in different workshops.  These include:

– Crisis, unemployment, job insecurity… do we need to invent a new economic model?
– Justice and human rights: personal reflections on the challenge of being a Christian.
– Ecumenical dialogue: to coexist peacefully or to let ourselves be transformed by encountering others?
– Do we need the Church? Bible reflection on fellowship in Christ.
– Europe, the land of migrations: how can we live together better?

During the meeting, the participants will meet at midday and in the evening for common prayers.

These prayers will take place simultaneously in three halls at Wacken (the Strasbourg Exhibition Centre), at the Cathedral and at St Paul’s Protestant Church.

Brother Alois’ meditations for the young people during the times of prayer will be published on the website.

A page on the Taizé website will give daily news of the meeting through the reactions of young adults.