Young people return from WYD2016 with joy and hope 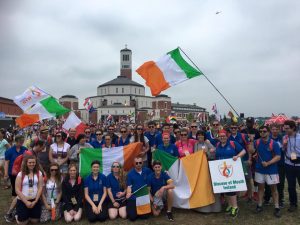 Meath pilgrims at Sanctury of JPII

‘Transformed, amazed and blown away’ are just some of the words that young people used to describe their experience of  World Youth Day (WYD) in Krakow.

Families and parishes are hearing such descriptions first hand throughout Ireland as the young pilgrims return home.

Others are reading of their experiences or seeing videos and photos on the websites and social media of the dioceses and religious groups who had participants at WYD.

“I actually found it amazing. It was so good just to see everyone. There were so many people, and the streets were crowded all the time. It was brilliant, I loved it,” said Niamh O’Driscoll, a UCC student from Skibbereen, Co Cork who travelled from Ireland with the Missionaries of the Sacred Heart (MSC) and joined a group of over 100 from Birmingham. 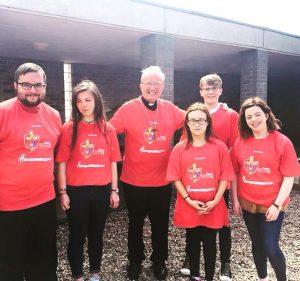 Some of the Derry group with Bishop Donal McKeown

More than two million young people from across the world gathered to celebrate their faith in Poland, and as one Derry participant said: “to go deeper in our friendship with Jesus.”

There were nearly 190 countries represented including those from war torn places like Syria.

For Lisa Price, one highlight was the visit to the Sanctuary of St John Paul II, a beautiful basilica built in the late Pope’s memory.

She explained how the group from the Meath met afterwards and discussed the importance of JPII and their memories of him.

She said that the group discussed how: “sometimes it is difficult it is to be a young Catholic in Ireland and difficult to express share your faith with others. There was a sense of unity in the group where we discussed how we could help and support each other in expressing our faith.”

She said that the atmosphere of the pilgrimage became a lot more solemn and silent as they visited Auschwitz concentration camp, but it was very much a desire of pilgrims, expressed many months ago, to make this a part of their pilgrimage.

“It reminded us to remember our humanity and the humanity of others so such a thing can never happen again,” she said.

Many groups went initially to various dioceses in Poland and did volunteer work as well as being hosted by Polish parishes, families and young people.

Later they went to Krakow for various liturgies, talks and vigils. The Pope was present for the Eucharist, having arrived in a tram like all the other pilgrims.

The participants experienced both serious, profound and prayerful moments, as well as joy, camaraderie and friendship of people from so many places in the world.

“The first (week) we got to know each other as a group and it was nice to do a bit of mission work, the second week was completely different. I loved it,” said Niamh O’Driscoll.

“It was just the atmosphere because everyone was so friendly and everyone wanted to talk to you, swap badges to get a momento from Ireland or England. Everyone was just so trusting… you wouldn’t have it anywhere else.”

The shared experience of liturgy in such a large group impressed many.

Fr Alan Neville, MSC Vocations Director, said one highlight was the vigil with over a million young people in reverent silent prayer in candlelight. 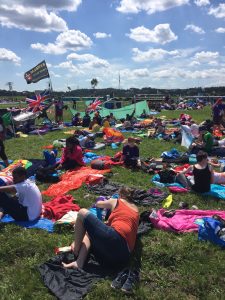 For others just knowing that there are so many active young Catholics in the world was a real boost and gave them a new optimism and hope to take home to Ireland.

“I suppose we came back with an outlook, with a bit more openness to life,” said Niamh O’Driscoll, who went to WYD with a friend.

“We are in the youth choir at home, we came back and we told them about their songs like how different it is and how young everyone is and how active. It was great to tell everyone at home about it.”

While the hundreds of young people who went to WYD may need a little time to recover from the very hectic pilgrimage, many are already thinking ahead about how they can get to the next WYD which will be held in Panama in 2019.