Young people at the Ploughing urged to read Messenger 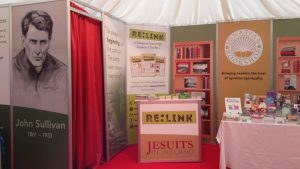 The much loved Sacred Heart Messenger is setting its sights on young people with a special supplement for teenagers.

Stating that the content is suitable for the Junior Certificate Religious Studies curriculum, Catriona Maher told Catholicireland.net, “It is very up to date. The text books they get are a bit out of date but this is coming up every month with interviews with young people, refugees, on how people become saints.”

She added that it offers extra materials and resources for students and teachers and they have a ready-made handout that they can use in class and a competition each edition.

“Its been going since January so it is relatively new. We’ve been to places like Youth 2000 to promote it and this is our first year here at the Ploughing with it. So it is definitely something that we can talk about with students (who arrive on the stand) and those in Transition Year as well and they can go back to their teachers and tell them about it,” she explained.

Catriona Maher was present on the Jesuit stand at the National Ploughing Championship to meet young people who arrived in groups from schools, or with the parents.

She was offering the much sought after free pens, a card with Pope Francis’ Five Finger Prayer and other leaflets as well as copies of the Messenger magazine.

She was also recommending to young people that they read the entire magazine, which has been published for more than 100 years.

“We want to show that there is loads in the Messenger as well, interviews with people like Fr Peter Mc Verry, about the missions and other things that are going on. We want to show that it is up to date but still within the Catholic tradition,” she said.

One issue features Fr Paddy Byrne and his story about becoming a priest and the new October issue includes articles about Halloween, earlier publications included topics such as life as a teenage refugee in Ireland and the Pope John Paul II award.

The supplement is compiled and edited by a secondary School Religious Education teacher Faith Quille. 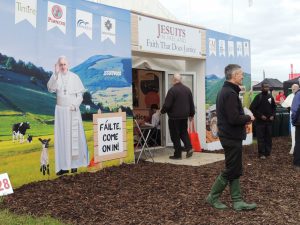 The Jesuits had a  stand which showcased many of their activities in Ireland and abroad from Pioneers to the Peter McVerry Trust.

Fr Piaras Jackson, Director, Manresa Jesuit Centre of Spirituality, Dublin, was among many of the priests present to invite people into the Jesuit tent which was also the venue for a 7.30am Mass each morning.

“The most interesting thing is the welcome,” he told catholicireland.net. “The Church is something that people want to see because it is part of their life, and all of life is represented here – from work to relaxation.”

Other religious groups were present at the National Ploughing Championships at Screggan near Tullamore, Co Offaly which ran from Tuesday 20 to Thursday 22 September.

Franciscan friars and Sisters had stands as did the Sisters of Cluny. Trócaire, Goal and Irish Aid illustrated African agriculture and irrigation and cultivation methods on their stand. Many others had fundraisers such as the annual Bothar tractor raffle.