Young people get to know Jesus at “play and pray” camp 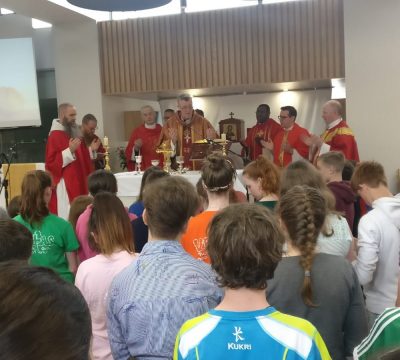 One hundred and seventy young people aged 12 to 18 took part in this year’s Camp Veritas in Clongowes Wood College this week.

The camp concluded yesterday with a Mass celebrated by Bishop Denis Nulty of Kildare.

Speaking to CatholicIreland.net on Friday, Ryan Young, director of Camp Veritas, described the week as “spectacular”.

“One thing is guaranteed, and that is that by the end of the week everybody is in love with Christ and especially the Eucharist. They have so much time with him every day they get to know him and it doesn’t matter where they came from, they leave as disciples of Christ.”

Camp Veritas is a non-profit organisation aimed at inspiring and forming young Catholic teens into disciples of Jesus Christ. It began in the United States ten years ago with just 55 young campers. This summer 1,500 teens and 500 volunteers have taken part in camps in Florida, Maryland and New York.

Mr Young brought Camp Veritas to Ireland five years ago, and it has run every summer since. Ireland is the only country outside the United States where the programme runs.

“I came to socially visit Ireland with my parents six years ago,” he told CatholicIreland.net. He was attending daily Mass and noticed there were no young people. After talking to Irish people he felt “there is something they’ve lost and they’re searching and they’re hungry and dabbling in all this stuff that is not good.”

Praying one evening near the ruins of the Franciscan monastery in Adare, he noticed “there were wild flowers growing from the very rocks – from the roofs, the walls. It was completely covered in flowers. I told the Lord ‘This land is in ruins but there is life here’.”

Mr Young determined to try to start a Camp Veritas in Ireland. Initial enquiries for facilities met with opposition and he decided to put it on the back boiler. However on his return to the United States, while attending another camp, a priest fell ill. When he returned from the hospital the next day, the priest told him: “I had the most vivid dream last night. I was in Ireland and it was bursting forth with flowers and God was gathering these flowers into bunches – it was the strangest thing because I’ve never been to Ireland.”

“With that I said, ‘The boss answered my question!’” A year later the first Camp Veritas took place in Gormanston College in Meath.

The week is described as a week of “play and pray”.

“Young people are immersed in their faith and they have lots of sacramental exposure, so every day there is Mass and Rosary and Adoration and testimonies. But they’re outside under the stars, eating cookies during testimonies, so it doesn’t feel like they’re in class,” said Mr Young.

“In between, there are all sorts of field sports, a talent show and we went to Glendalough yesterday hiking. They are immersed in the faith and around those of religious life and priests, where they are basically taught the faith well and they love it.”

Five religious sisters, four priests and two brothers are among the 60 volunteers who run the camp. These came from the Franciscan Friars and Sisters of the Renewal and the Sisters of Jesus’ Mercy. Fr Rory Brady from Derry has been present all week too.

Máire O’Brien, whose 16-year-old daughter attended the camp, said it has a “real transformative effect”.

“There is no mincing on the rules which are very clear cut and include no technology or cell phones. There is a beautiful atmosphere,” she said.