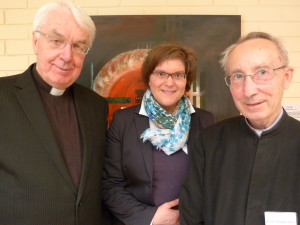 Pope Emeritus Benedict XVI appeared to be in good health and in excellent form according to an Irish former student of his who attended this year’s Ratzinger Schülerkreis in Castel Gandolfo.

Fr Vincent Twomey, the retired professor of moral theology at Maynooth, said his former doctoral supervisor was “A man of deep friendships who enjoys the company of his friends” and “seems to blossom each time we meet with him for our annual meeting”.

Last Sunday, Fr Twomey travelled with all the participants of the 2015 Schülerkreis from the papal summer palace in Castel Gondolfo to the German College in Campo Santo, just inside the Vatican, for a concelebrated Mass with the Pope Emeritus.

“Pope Emeritus Benedict preached, without an note, a very beautiful homily on the Gospel of the day about the way the heart is purified though encounter with Jesus Christ, the Word made flesh as mediated by His words (Scripture)”, Fr Twomey said.

After the Mass, the Hall in the German College, which was once the museum, and is now named the Pope Benedict XVI Hall, was opened and the Pope Emeritus received each of his former students and new students, and exchanged greetings.

“I introduced four Irish members of the International Ratzinger Symposium, which is held annually in the Divine Word Missionary House in Maynooth, to the former Pontiff,” Fr Twomey said.

The four were Dr Mary McCaughey, who is also a member of the new Schülerkreis, Dr Mark Frances McKenna, Dr Mariusz Biliniewicz and Philip Cremin. 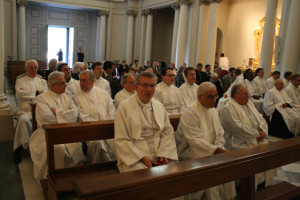 Each presented the retired pope with copies of their recent publications or theses.

“I also presented Pope Benedict with a copy of the recently published doctoral dissertation on conscience in historical and existential context by my own former doctoral student, Stuart Chalmers of Aberdeen,” Fr Twomey said.

The Czech intellectual and scholar, Professor Tomas Halik, winner of the Tempelton Prize (2014), was guest speaker at this year’s meeting of Ratzinger’s former students.

The meeting has been held in Castel Gandolfo since Joseph Ratzinger’s election as Pope.

The original Schülerkreis, which was established in 1980, was joined by the circle of young scholars of Ratzinger’s theology (the Neuer Schülerkreis), under the direction of Cardinal Kurt Koch, President of the Pontifical Council for Ecumenism.

The meetings were moderated by Fr Professor Emeritus Stephan O. Horn, SDS, former assistant to Professor Ratzinger and now spokesperson for the Schülerkreis.

Mgr Halik, who also runs the university chaplaincy in Prague, read two papers, the first was entitled ‘How to speak – or to keep silent – about God today’; the second was on the topic ‘Love: the altar of the Unknown God’.

In his first paper, Professor Halik developed ideas found in his earlier writings about the contemporary drift into atheism.