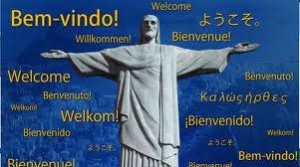 The majority of the Irish Church’s one hundred and seventy young pilgrims who are taking part in World Youth Day in Brazil are due to arrive in Rio de Janeiro today.

They are accompanied by Archbishop Diarmuid Martin of Dublin and Bishop Denis Brennan of Ferns.

Bishop Donal McKeown, who is Chair of the Bishops’ National Committee of Diocesan Youth Directors, is already in Brazil having travelled there late last week with a group of pilgrims from Northern Ireland.

Over the week, 273 liturgical events will be held in ten different regions in Rio de Janeiro and neighbouring dioceses as part of the largest faith festival in the world.

Pope Francis is due to arrive in Brazil on Monday, his first international trip as Pontiff. This is only the second World Youth Day to be held in South America; the first was held in Buenos Aires, Argentina, in April 1987.

Some of the standout moments lined up for the Latin American pontiff include the blessing of a clinic for those coping with drug addiction; a visit to the favela of Manguinhos, one of the poorest in Rio; a welcome ceremony on Copacabana beach; the hearing of young Catholics’ confessions; silent adoration and the celebration of Mass with pilgrims.

The English version of the WYD Anthem ‘Go be missionaries’ will be performed by British band, Ooberfuse. It can be heard here: http://www.rio2013.com/en/world-youth-day/wyd-hymn

To coincide with WYD Rio2013 dioceses in Ireland are preparing special gatherings and events.

In Dublin’s Capuchin Friary on Church Street, a special two-day event ‘Rio in Dublin’ is taking place next weekend to coincide with WYD2013. It is aimed at young people who have either attended a World Youth Day or would like to savour some of the atmosphere of what takes place at World Youth Day.

– Young people will be welcomed by members of the local Brazilian young people here in Dublin.

– Video links to Rio for some of the key ceremonies involving Pope Francis.

– A programme of catechesis, music, prayer – from late Saturday through to Sunday.