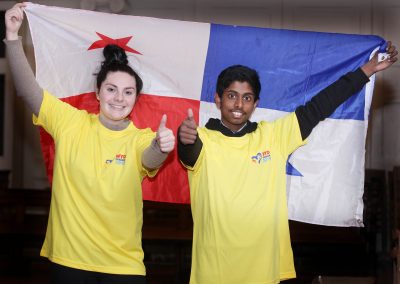 Amy O’Brien and Jacob Antochen attending their final preparation before their departure on 18 January for World Youth Day in Panama, which will be led by Pope Francis. Pic John Mc Elroy.

Among the thousands of young people from around the world who will converge on Panama City from 22 to 27 January for World Youth Day will be a group of 30 young pilgrims from the Archdiocese of Dublin.

In a video message to young people last November, Pope Francis invited them to get off their sofas and improve the world through their dreams, ideals and courage.

In the video, the Pope recognised young people’s willingness to serve others and invited them to put this attitude into practice from a Christian perspective: “To be at the service of others does not only mean to be ready for action. It means also to be in conversation with God with an attitude of listening, just like Mary. She listened to what the angel said to her and then she responded,” the Pontiff said in the message.

The message, published on the day of the celebration of the Presentation of the Blessed Virgin Mary, concludes a cycle of three Marian messages dedicated to young people along their journey from WYD 2016 to WYD 2019.

Pope Francis personally chose Panama as the location for this year’s WYD and he will be there from 22 to 27 January.

The massive youth event will be hosted in 33 locations around Panama City, engaging young people from all over the globe in expressions of faith, art and culture.

The Dublin group will arrive in Panama this Friday (18 January). They will stay with families in a host parish, Parroquia Santiago Apostle.

Along with groups from Latvia and New Zealand, they will take part in a social justice programme with local young parishioners, visiting the elderly and housebound and helping prepare and deliver food to families in need in the locality.

On Saturday, six members of the Dublin group will be taking part in an environmental debate – “Youth for the Common House – Safeguarding of Creation” – inspired by the message of Pope Francis in Laudato Si’.

The Dublin group will also take part in the opening ceremony for the arrival of Pope Francis, the Way of the Cross, vigil and concluding Mass on Sunday 27 January.

Meanwhile, a mirror event will take place in Ireland, titled “Panama in Dublin”, at the Emmaus Centre in Swords, Co. Dublin on Saturday and Sunday (26 and 27 January).

It includes a range of faith-led activities. Participants will also link live to the events in Panama, in particular Pope Francis’ address at the opening ceremony, vigil and concluding Mass.

Young people from parishes throughout Dublin will take part in “Panama in Dublin”.