New York pilgrims to fly into Knock in August 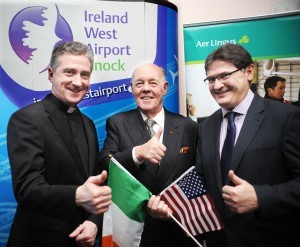 Knock Airport has announced the return of transatlantic flights for the first time in eight years.

In August a diocesan pilgrimage from New York will bring up to 200 pilgrims from the US for a week-long visit on a service operated by Aer Lingus.

The transatlantic pilgrimage flight from JFK Airport is expected to include the leader of the catholic church in the archdiocese of New York, Cardinal Timothy Dolan.

The arriving pilgrims will participate in the annual nine-day Knock novena in honour of Our Lady which attracts thousands to the national shrine every August.

In what the airport hopes will become a regular service, the Aer Lingus flight will depart New York on Saturday 8 August and return on 16 August.

This new development for the airport and the shrine was announced by Fr Richard Gibbons, parish priest of Knock on Friday at the Knock House Hotel.

The chairman of Ireland West Airport Knock, Joe Kennedy, commented, “We hope this is an important stepping stone in securing regular transatlantic services for the region into the future and we look forward to welcoming our US visitors to the West of Ireland in 2015.”

The development comes as a major redevelopment of Knock Shrine continues.

There are plans to update the 38-year-old basilica while greater efforts are undertaken to promote the shrine among potential visitors from Europe and America.

Around 1.6m people visit the shrine every year.

The idea of a special pilgrimage flight to Knock was first mooted two years ago by Fr Gibbons during a visit to New York for St Patrick’s Day in a meeting with Cardinal Dolan.

On Friday, Fr Gibbons said the flight marked an important and historical step in the promotion of Knock Shrine at home and abroad and he paid tribute to the support of Cardinal Dolan.

“It is hugely significant that the Archdiocese of New York, led by Cardinal Timothy Dolan, is deepening its relationship with Knock Shrine and highlighting the spiritual heritage of Irish Americans especially in New York,” he said.

“It is important to note that Ireland West Airport Knock was built specifically to welcome pilgrims to Knock Shrine as well as to develop the economic life of the West. Monsignor James Horan, I’m sure, would be very proud,” Fr Gibbons said.

Declan Kearney, Director of Communications with Aer Lingus said the airline is delighted to have been chosen to provide the flights for the pilgrimage, while Chief Executive of Mayo County Council, Peter Hynes said this was a significant step forward for the entire west of Ireland region.

There are an estimated 2.8 million Catholics living in New York City. Packages for the pilgrimage to Knock are now on sale with a leading New York pilgrimage tour operator.

Fr Gibbons said it is hoped the chartered pilgrimage flight will be first step towards establishing commercial flights between IWAK and other American cities.

Last year was a record breaking year for Knock Airport with passenger numbers exceeding 700,000 for the first time in the airport’s 29-year history.

It now serves over 20 international destinations and is served by three of Europe’s major international airlines, Aer Lingus, Flybe and Ryanair.

August 2014 also saw the airport experience its busiest ever month with a total of 102,774 passengers passing through the terminal – the first time in its history that over 100,000 passengers have used the airport in a calendar month.

2014 also saw a major increase in traffic to/from the UK, which represents the airports biggest market, with traffic up 9.4% on 2013 numbers.

Particularly strong performers were Ryanair’s London services to Stansted and Luton, which carried an extra 44,000 passengers (up 20%), whilst Aer Lingus’ London Gatwick service grew by 6%. Flybe services to Manchester and Birmingham, also performed strongly with passenger numbers up 9% across both routes.