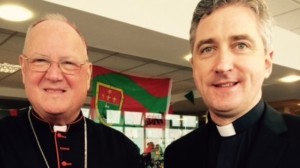 At a Mass of Welcome in the newly refurbished basilica in Knock, parish priest Fr Richard Gibbons described the presence of the first chartered pilgrimage from America as ‘New York meets Knock’.

The Mass at noon on Sunday was televised by RTE and celebrated in the presence of the papal nuncio to Ireland, Archbishop Charles Brown, Cardinal Timothy Dolan, Archbishop of New York, and Archbishop Michael Neary of Tuam, as well as up to 4,000 pilgrims from Ireland and overseas.

“The fact that we are welcoming our pilgrims here today is a result of faith in action as well as being a witness to our hope and trust in God,” Fr Gibbons stated as he described Knock as “happy” to receive the American pilgrims.

He told the congregation that the ‘Witness to Hope’ project in Knock is about “renewal of the shrine and helping with the renewal of the Church in the country”.

The aim was to renew the Church spiritually, intellectually, pastorally and to engage with the world and not be afraid of it, he said.

The renewal project has three main areas of focus – faith renewal programmes which are already underway; the refurbishment of the basilica which is 80% complete; and the promotion of the shrine at home and abroad; which Fr Gibbons said had resulted in the presence of the 178 New York pilgrims.

The US pilgrims had just arrived in Knock at 8.30am on Sunday morning brought by the first Aer Lingus chartered pilgrimage flight. The Knock parish priest expressed the hope that it would be “the first of many”.

“We are all of us on a journey together, a pilgrimage of hope in this life. The writer Victor Hugo wrote that the word which God has written on the brow of every person is hope. Today, as New York meets Knock, all of us gather here to meet the Lord. He is here present amongst us.”

He said Knock had seen its fair share of drama; the apparition on 31st August 1879 occurred at a time of land war and physical hunger. “It brought hope and consolation not only to the 15 witnesses that night but also to the millions of people that have come here since,” he commented.

The hope it brought was not a false hope: “It is not a hope that closes its eyes to the difficulties, risks and failures of life. It is one that says to us all, individually and collectively, that if I fall down, I can pick myself up; if I am hurt, I shall be healed; if I have faith, it will be rewarded and if I have love, I will see everlasting life.”

At the opening of the Mass, Archbishop Neary welcomed the pilgrims from New York for what he described as “an historic occasion – the first pilgrimage from across the Atlantic to Our Lady’s Shrine here at Knock”.

Extending a very special welcome to Cardinal Timothy Dolan, Dr Neary said the Archbishop of New York had informed him that he had first come to Knock as a teenager in 1973.

He also welcomed the Holy Father’s representative in Ireland, Archbishop Charles J Brown, the apostolic nuncio, a priest of the archdiocese of New York who had joined the pilgrims on the flight.

In a brief message, Cardinal Dolan said he and the pilgrims had been up for over 24 hours and were tired but he wanted to say two words: “Thank God”.

He recalled that he had learnt those two words as a boy from Irish Sisters of Mercy who came from the diocese of Meath and taught him in Missouri.

“My pilgrims from America join with me in thanking God for the grace and mercy the Lord and his Holy Mother have lavished upon this magnificent shrine at Knock,” he told the congregation assembled in the basilica.

He added, “My fellow pilgrims and I say thank God for the faith of the people of Ireland which has inspired Americans and indeed all the world.”

At Knock Airport on Sunday morning, the pilgrims and their Cardinal were greeted by the Taoiseach Enda Kenny when the Aer Lingus flight landed.

Mr Kenny described it as a day “of exceptional importance for the people of the West of Ireland and we welcome our American visitors with open arms.”

Speaking at a reception at Ireland West Airport, Cardinal Dolan said, “We hope and pray this will be the first such trip of many from New York to Knock.”

He added, “We are so honoured to be part of this historic visit and will spread the word in America about what this beautiful part of Ireland has to offer.”

The Cardinal will officially open this year’s National Novena in Knock on Friday with an address on marriage and the family.