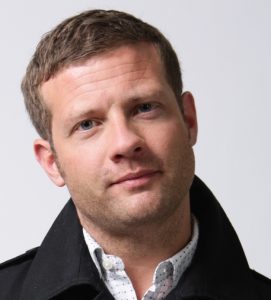 X Factor presenter Dermot O’Leary has given his support to an appeal to help the Irish in London.

The TV star and DJ has given the annual fundraiser a boost by becoming  patron of the London Irish Centre (LIC), which helps Irish people who are lonely or have fallen on hard times.

“It’s a big honour for me to be patron of the LIC. I’m very proud of my Irish heritage. My parents were part of the post war generation of immigrants who came to London to find a new life, so the London Irish community is one that is very close to my heart. We want and need the Irish community to support this important work for the Irish in most need,” said Dermot O’Leary.

His parents, Seán and Maria, who live in Colchester, came from Wexford. He supports the Wexford hurling team as well as the Irish soccer team.

He has stated that he is a typical ‘plastic Paddy’ or second generation Irish with Catholic parents, making frequent trips ‘home’ to Ireland.

In secondary school he was involved with CAFOD, the Catholic aid agency. A few years later he and his father travelled to see the agency’s projects in Sierra Leone. When asked whether his support of a Catholic aid agency might damage his image at a time when he was a rising star, he said that the charity’s message is ‘progressive’ and that his Catholicism is part of him.

In 2004 he presented an award-winning documentary, ‘Some of My Best Friends Are Catholic’, on Channel 4. 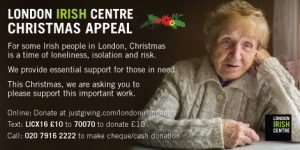 Now he has backed the London Irish Centre, which began with a fund established by the Catholic Church (the Irish Priests Committee) to provide support for young Irish emigrants in London. Many of its staff in the early years were priests and other members of the Church.

The Centre itself opened in 1955, providing accommodation (as a hostel in its early years), employment support and a starting point to those arriving in London from Ireland. The Camden Square location was close to Euston Station, where Irish people stepped off trains from Holyhead ferry port.

The London Irish Centre was a hive of Irish social activity, with dinner dances and socials. It was a place for forming friendships and meeting spouses.

Nowadays the centre is run by many lay professionals and volunteers. Its Christmas appeal is well under way.

“For most of us, Christmas means friends and family, presents and looking forward to a great New Year. But, for many vulnerable Irish people in London, it means loneliness, a long hard winter and, with ongoing welfare cuts, a grim time in 2017. This appeal helps us to provide support and advice services to those in most need,” said Seán Kennedy, CEO of the London Irish Centre. 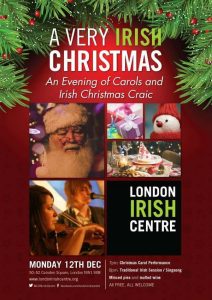 The campaign to raise funds to support these people is called JustGiving. The LIC has welcomed several generations of Irish emigrants. Its welfare service is the largest for Irish people outside of Ireland and each year helps thousands of people to improve their housing, income, access to health, and social inclusion opportunities.

In 2013, LIC helped more than 13,000 welfare clients. It has over 150 volunteers and 30,000 people are connected to its online communities. More than 25,000 people experience Irish culture with LIC every year.
For further details see: http://www.londonirishcentre.org/.