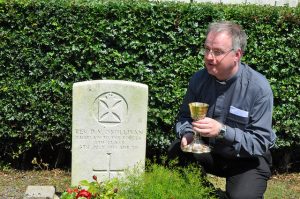 Fr Donal O’Sullivan, who served as a World War I chaplain and was killed in the first week of the Battle of the Somme on 5 July 1916 while ministering to the wounded, is to be remembered and prayed for at Masses across the diocese of Kerry today.

The Bishop of Kerry, Bishop Ray Browne has asked that prayers would be also be offered for world peace and for people everywhere who serve in the army of their country.

Fr O’Sullivan is buried in the cemetery at Bouzincourt in the valley of the Somme.

He was born at 6 High Street in Killarney and was aged just 26 when he was killed. Educated at the Monastery National School, St Brendan’s College in Killarney and Maynooth, he was ordained in June 1914.

He taught in St Brendan’s College for eighteen months prior to volunteering as a chaplain in the Great War and he served as chaplain to the 7th Brigade.

Today, Fr Donal O’Sullivan is remembered by a photo and plaque in the chapel of St Brendan’s College.

Accounts of his time at the front recall how one of the soldiers asked Fr O’Sullivan to hear his confession because the following morning they were going over the top of the trench to attack the German lines.

Fr O’Sullivan asked him to collect as many of the Catholic soldiers as he could and he would meet them in the chapel. There he prepared them for general confession, gave them general absolution and offered the Sacrifice of the Mass for them.

Half of the communicants were fated not to return, including Fr Donal O’Sullivan. He was killed by a shell, which exploded beside him as he was giving the Last Rites to a wounded soldier.

Rev C.T. McGuinness of the 76th Ambulance Brigade wrote that Fr O’Sullivan was quite fearless and would face any danger to give the sacraments to the wounded and dying.

His chalice, which his family had presented to him on his ordination, was returned to his family. It has stayed in possession of his family who had hoped that a vocation would arise from among them.

However, this was not to be and so the family gave the Chalice into the care of the Vocations office for the ‘Year of Priests’ to be used to encourage vocations. 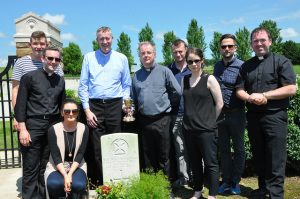 The Chalice has since been in the possession of St Joseph’s Young Priests Society.

On Tuesday 5 July 2016, St Brendan’s College Chapel, Killarney will host a 1916 seminar to mark the 100th anniversary of the death in France of Fr Donal O’Sullivan.

Mass in Irish will be concelebrated at the college to recall the former ‘Sem’ professor “who had a great love the Irish language”.

The liturgy will also celebrate the Centenary of the founding of Cumann na Sagart. Fr Pádraig Ó Siochrú is the homilist.

Following the concelebrated Mass two lectures will be given: firstly, a memorial lecture in memory of Fr Donal O’Sullivan titled “Catholic Chaplains in World War 1” which will be given by Canon Gerard Casey, parish priest of Mallow.

It will be followed by a talk by Fr Tomás Ó Luanaigh on ‘Kerry Clergy in the National Movement’.

On Friday 1 July, Archbishop Eamon Martin of Armagh joined Church leaders from Ireland and up to three thousand people in a ceremony of worship at the Ulster Memorial Tower, Thiepval in France, to commemorate the 100th anniversary of the Battle of the Somme.

In a statement, the Church leaders said “Let us put our faith into action – love our neighbours, reach out to the stranger, care for the vulnerable, build community and be agents for peace, forgiveness and reconciliation.”

Archbishop Eamon’s participation in the commemoration followed his visit last week with Archbishop Richard Clarke, and young people from across the island of Ireland, to places linked to the Easter Rising and the First World War.

During that pilgrimage, the cross community pilgrimage group visited graves of Irishmen who perished in the war, including that of Fr Donal O’Sullivan.

The group had brought his chalice with them and prayed at his grave with the chalice.

Thousands of soldiers from across Ireland died or were wounded at the Somme as part of the British Army. The first day, 1 July 1916, was the bloodiest in British military history.

On Friday, Archbishop Martin said “In remembering the horrors of the war a century ago it helps us to redouble our efforts towards building peace, healing and reconciliation.”