Home > Eighth Amendment > The world is “watching and praying with Ireland”

The world is “watching and praying with Ireland” 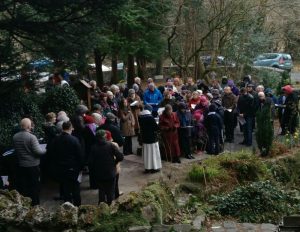 People are praying in Britain, Australia, Peru, France, Italy, Poland, Switzerland and other countries that the equal right to life of the unborn and his or her mother will be kept in the Irish constitution, according to one of the organisers of the ‘Rosary at Mass Rocks’ campaign.  Last weekend, despite terrible weather, groups of Catholics the length and breadth of Ireland, met at rosary rocks or other sacred places, to pray the rosary for ‘Life and Faith’. In addition, people prayed across the world.

Former MEP, Kathy Synott, told CatholicIreland that at least two American bishops had written to all their parishes asking for prayers. Last weekend, for example, in the parish of Lincoln, Nebraska, eighty people prayed the rosary for Ireland before Sunday Mass, joining the thousands who were praying at sacred places around Ireland on the same day, 18th March. Over 130 venues for the ‘Rosary at Mass Rocks’ are listed on  www.coastalrosaryireland.ie  where groups were to gather last weekend.  Thousands of people braved arctic temperatures that day although on the eastern coast, according to Ms Synott, the crowds were “decimated” because of heavy snowfall.

Some groups plan to meet to pray this Sunday instead – at Saint Patrick’s Well, Marlfield, Clonmel, in Tipperary at 2.30pm, at St Abban’s Church and monastery ruins in Killabban, Maganey in Laois and at St Michael’s Church grounds Gorey, Wexford. 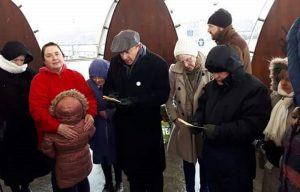 Bishop Alphonsus Cullinan leads prayers at the Plaza in Waterford on 18th March 2018.

In the United States, Archbishop Samuel Aquila of Denver, has written to all of his priests urging them to pray for the Referendum. “If Ireland votes in favour of repeal, the government has said it will introduce legislation permitting unrestricted abortion during the first 12 weeks of pregnancy. This is a battle not just for babies but also for the soul of Ireland,” he wrote.

The Church in Ireland is up against the forces of government, the media, and big money, he continued. “I ask that all of us in the Archdiocese of Denver join Ireland in prayer on March 18th. Please encourage the faithful to pray the rosary or spend time in Eucharistic Adoration for the cause of life in Ireland.” In an email to Kathy Sinnott, the Archbishop of Denver said that the world was “watching and praying with Ireland” and said  parishes would continue to pray from now till the referendum in May.

The largest gathering last weekend is believed to be at Emmanuel House Clonfert, where between  700 and 800 people gathered to pray the rosary.

Rosary at Mass Rocks, is part of the Coastal Rosary Ireland campaign which saw around 30,000 people gathering in November to pray at beaches around Ireland. Details of further prayer initiatives are at  https://www.coastalrosaryireland.ie/.