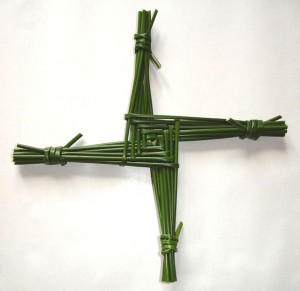 The Brigidine Sisters in Kildare are appealing for volunteers to help them set a world record for the largest number of people making St Brigid’s crosses all at the same time.

The Guinness Book of Record officials have been notified that Kildare will host this first ever attempt at a world record and the date is set for Saturday 21st September in the town.

“This is the first time this has been done and they have created a special category for us,” Sr Mary Minehan told CatholicIreland.net.

While the Sisters think that setting a world record would be “wonderful”, Sr Mary said the “main thing is that people get to learn how to make the St Brigid’s Cross.”

Already people have been inquiring about participating. “There is a great interest, it is building up nicely. Mainly local people are signing up and we have to teach many of them how to make the cross because it is not everyone who knows,” Sr Mary said.

There are no better teachers than the Brigidine Sisters who are known for weaving the cross and giving a talk at the same time.

There are also several Kildare locals, who are veterans of the Feile Bhríde festival, lined up to help and they will be involved in workshops where people can learn how to weave the cross with rushes to the particular specification required.

According to Sr Mary, it is very important that those interested in participating register.

She explained that St Brigid’s Cross is a universally recognised symbol, and has been adopted as the symbol of the national TV station in Ireland. She feels the September event will generate a greater awareness both in Ireland and all over the world of St Brigid’s legacy.

This Guinness Book of Records attempt is part of the St Brigid of Kildare Gathering Festival which is taking place from 15 – 21 September 2013.

At the festival there will be a special welcome or ‘Céad Míle Fáilte’ to those named Brigid and those who have variations of the name. A Facebook invitation has gone out for all Brigids to gather during the festival.

Likewise the organisers will welcome people from Ireland and all around the world who have an affinity with St Brigid through parishes, associations, churches and place names – in short anyone with an interest in Brigid and her legacy.

In addition to the Guinness World Record challenge there will be a packed programme of music and dance events during those six days, including walks, pilgrimages, craft demonstrations and craft workshops, each linking to Brigid and her legacy. Julie Feeney is to perform during the festival in St Brigid’s Cathedral in Kildare Town.

The festival is being organised by Solas Bhríde Spirituality Centre led by up to four Brigidine Sisters in Kildare town in collaboration with a number of other Kildare-based groups. It is part of the overall Government supported Gathering Festival 2013.

The Brigidine Sisters are present also in Counties Laois and Carlow as well as elsewhere in Ireland and abroad.

They have a major fund raising campaign underway to raise money for a larger and ecologically sustainable centre and hermitage in Kildare which will be opened next year.

Further details are available on: www.solasbhride.ie