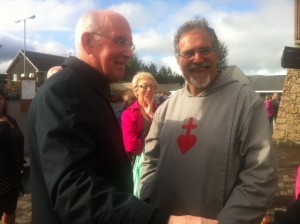 The first ever Worldpriest Tóchar Phádraig Pilgrimage Walk concluded in Knock on Thursday, the Feast of the Assumption, where priests and pilgrims entrusted their lives and ministry to Our Lady in the Basilica.

The group, who included pilgrims from Siberia, Canada, France, Ireland and the USA, joined up to 15,000 other pilgrims at the shrine for the consecration of Ireland to the Immaculate Heart of Mary.

The four-day pilgrimage from Ballintubber Abbey in Co Mayo to Croagh Patrick and on to Knock was organised by the religious organisation, World Priest, as part of The Gathering.

The WorldPriest Tóchar Phádraig Pilgrimage was formally approved for the Gathering. World Priest also tied it in with the Year of Faith and made the group leader, Fr Michael Shields, who is based in Magadan in Siberia. 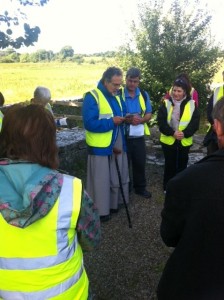 The Tóchar Phádraig invited pilgrims to follow the path trodden by St Patrick, where he learned how to pray in the hardships of slavery while shepherding in the Slemish Mountains.

His captivity became a remote preparation for his future apostolate, where Pope St Celestine I entrusted him with the mission of gathering the Irish race into the one fold of Christ.

It was probably in the summer months of the year 433, that Patrick and his companions arrived in Ireland.

World Priest are a group of committed Catholic communications and advertising laypeople, who love and cherish the priesthood of Jesus Christ.