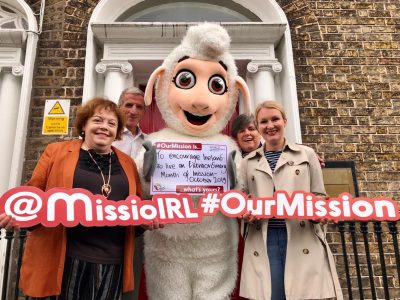 World Missions Ireland is part of a global network in over 120 countries coordinated by the Pontifical Mission Societies in Rome.

Together this network forms the Church’s official charity for overseas mission.

The network provides over 1,000 struggling young dioceses in over 157 countries with the tools and resources they need to become self-sufficient.

In collaboration with this international network, World Missions Ireland has created a number of ways that individuals, schools, organisations, dioceses, parishes, communities, orders and congregations can celebrate the Extraordinary Month of Mission (EMM2019).

As part of a social media campaign – #MyMission and #OurMission – individuals and groups are being invited to share about their mission to reach out in kindness on either Facebook or Twitter.

The campaign has a mascot in Ireland – Eirinn the Lamb. It is part of an initiative to show how people across the globe are putting their faith into action throughout September and October.

In addition to the digital campaign, an official hymn and prayer have also been commissioned.

Choirs are encouraged to sing the hymn “Baptised and Sent”, which was composed by World Missions Ireland’s sister charity Missio Malta, throughout October.

The Extraordinary Month of Mission Prayer will also play a part in the EMM2019 Universal Prayer Chain.

As an act of solidarity and love for all people, Pope Francis is inviting the entire Universal Church to pray the Extraordinary Month of Mission Prayer after the Angelus every Friday during October.

World Missions supports the 40 per cent of the Universal Church that is too new, young or poor to support itself.

Since its announcement as a papal collection in 1926, World Missions Ireland has been entrusted with the coordination of the World Mission Sunday collections.

For more information on how to get involved: www.wmi.ie/emm.