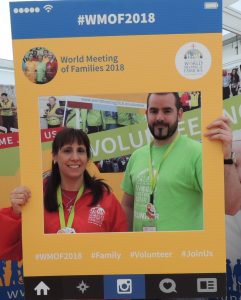 The World Meeting of Families 2018 was looking to recruit at least some of the more than 200,000 people who attended the National Ploughing Championships this week in Co. Offaly.

“It’s going to be a historic global event. It’s going to be lots of fun, but in order to deliver it we need thousands of volunteers to help us,” Richard Brennan, Volunteer Project Manager, World Meeting of Families 2018 (WMOF) told Catholicireland.net.

“We are here at the ploughing to personally invite people from all over Ireland to be a part of it. It is not a Dublin event. It is a global event. People are travelling from all over the world,” he said.

He explained that he and his colleagues are inviting people from all over the island of Ireland to be part of “this piece of history”.

“Whether it is to be a volunteer or to buy a ticket and be part of it, we are letting them know it is on, giving them time to think about it and to prepare for it and to be a part of it,” he said.

Already 1,100 people have signed up, but WMOF needs a minimum of 2,000 for the 3-day conference at the RDS. Then there is also the Festival of Families day and concluding Mass to cater for. In comparison, there were 10,000 volunteers in 1979 at the late Pope John Paul II’s Mass in the Phoenix Park . 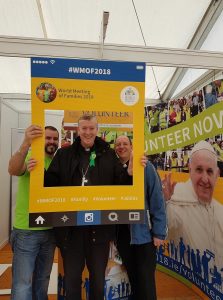 “If and when that [the Pope’s visit] is confirmed we will need several multiples of 2,000 volunteers,” said Richard Brennan.

The second most asked question at the Ploughing was about volunteering roles: “What will I be doing?”

The WMF event runs from 21 to 26 August 2018, and volunteers are needed for a few days before and after to set up and take down. There is a volunteering role to suit everyone, young and old, active and less active, Catholics, other Christians and those of goodwill who simply want to get involved.

Everyone is welcome to volunteer and make their unique contribution, and Richard Brennan urged them not to hesitate, because full training will be provided.

Roles include everything from stewarding to operating information stands, ticketing, registration and merchandising, providing first aid and medical assistance, and so much more. Every talent and skill can be useful. For example, a retired primary school teacher got involved in translating WMOF material into Irish.

Richard Brennan highlighted that those wishing to volunteer should be living in Ireland and be aged 18 or over, although groups of young people such as scouts or youth groups aged 16 to 18 can also register to help as part of their particular group.

There are three simple stages to the volunteer application process:
1) Sign up online, or get help by phoning or visiting the WMF office
2) Apply for Garda vetting (local Citizens Advice office can help)
3) Attend training days